WASHINGTON - A bipartisan group of governors from a dozen U.S. states urged President Joe Biden to back phasing out the sale of new gasoline-powered vehicles by 2035.

A letter published Wednesday calls on Biden to set standards "to ensure that all new passenger cars and light-duty trucks sold are zero-emission no later than 2035 with significant milestones along the way to monitor progress."

The governors, which include Democratic Gov. Gavin Newsom of California and Republican Gov. Charlie Baker of Massachusetts, also ask the president to similarly set the country on a path toward 100% zero-emission sales of new medium-duty and heavy-duty vehicles by 2045.

They argue that by establishing "a clear regulatory path to ensuring that all vehicles sold in the United States are zero-emission, we can finally clear the air and create high-road jobs."

"Moving quickly towards a zero-emission transportation future will protect the health of all communities," the letter reads, which was also signed by the governors of Connecticut, Hawaii, Maine, New Jersey, New Mexico, New York, North Carolina, Oregon, Rhode Island and Washington.

Biden’s $2.3 trillion infrastructure and jobs plan includes a $174 billion investment in the electric vehicle (EV) market, including tax credits and incentives to build "a national network" of 500,000 charging stations by 2030, but the plan doesn’t call for phasing out gas-powered passenger vehicles by a certain date.

"The proposed investments in the American Jobs Plan can be leveraged even further by a strong regulatory framework and will allow the market for American-made zero-emissions vehicles (ZEVs) to flourish," the letter states.

The governors added that the bill should include "substantial funding for investment in charging and fueling infrastructure" for states.

In September, California said it planned to end sales of new gas-powered passenger cars and trucks by 2035. Newsom also directed the California Air Resources Board to establish regulations that require all new cars and passenger trucks be zero-emission vehicles by 2045 "where feasible."

Newsom is now facing a recall effort amid growing public anger over COVID-19-related health orders that shuttered schools and businesses in the state, as well as a massive unemployment benefits fraud scandal. He faced widespread criticism after being pictured at a restaurant not following the pandemic protocols he set forth.

The world’s major automakers believe electric vehicles will dominate their industry in the years ahead. General Motors, the Detroit automaker making an aggressive push into EVs, established a goal in January of offering electric-only vehicles by 2035 and becoming carbon neutral in both its global products and its operations by 2040.

Volvo has said its car line-up will be fully electric by 2030, while Ford said 100% of its passenger vehicle range in Europe will be all-electric by 2030.

In contrast to the U.S., sales of EVs have taken off in Europe and China, largely because of much more far-reaching pollution regulations and government incentives. Those tighter environmental regulations are forcing the industry to sell more electric vehicles.

Recent opinion polls show that a substantial majority of Americans might consider an EV if it cost less, if more charging stations existed in the country and if a wider variety of models were available.

One recent survey by market research firm Ipsos found that a majority (52%) of U.S. residents agree that electric vehicles are instrumental in combating climate change, and 46% agree that governments should increase tax incentives for people who buy them. 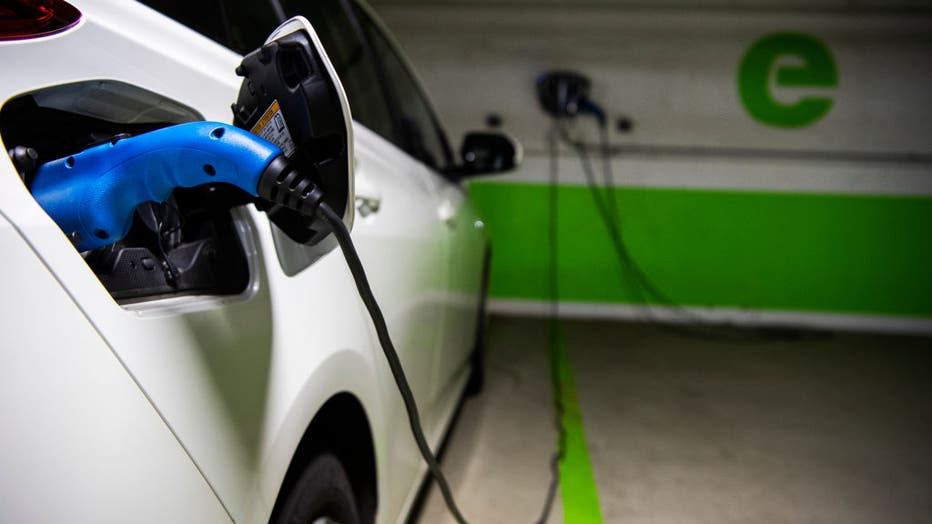 But Rory Gamble, the president of the United Auto Workers union, has expressed caution about the shift to fully electric vehicles, arguing that it takes fewer workers to build them compared to gas-powered vehicles, Reuters reported. Gamble has said "workers will disproportionately suffer if we do not get it right," according to the outlet.

Last month, Gamble said the U.S. must ensure the transition to electric vehicles "is stable, reliable and creates quality union-wage jobs and flexible to market demand not relying on a one-size-fits all solution," Reuters reported.

Democratic lawmakers on Wednesday also unveiled legislation that would invest $25 billion to convert the nation’s fleet of gasoline- and diesel-powered school buses to electric vehicles, aiming at a component of Biden’s infrastructure plan to improve children’s health.

School buses make up 90% of the nation’s total bus fleet and typically carry nearly 25 million children each day. Emissions from diesel engines may contribute to respiratory illnesses in children, studies have found, and have been linked to poor academic performance.

The bill, led by Sen. Alex Padilla, D-Calif., would authorize federal grant money over 10 years, with 40% of it devoted to replacing school buses that serve mostly nonwhite, poorer communities.

The legislation seeks to build on the Biden administration’s effort this week to promote the electrification of school buses, which the president sees as an important step in addressing climate change and economic inequities.

Biden and Vice President Kamala Harris are highlighting their proposed $45 billion in infrastructure spending to accelerate the adoption of zero-emission transit buses and school buses this week. On Monday, Harris visited a North Carolina bus manufacturing plant and urged $20 billion in investments to help convert the nation’s 500,000 school buses to electric.