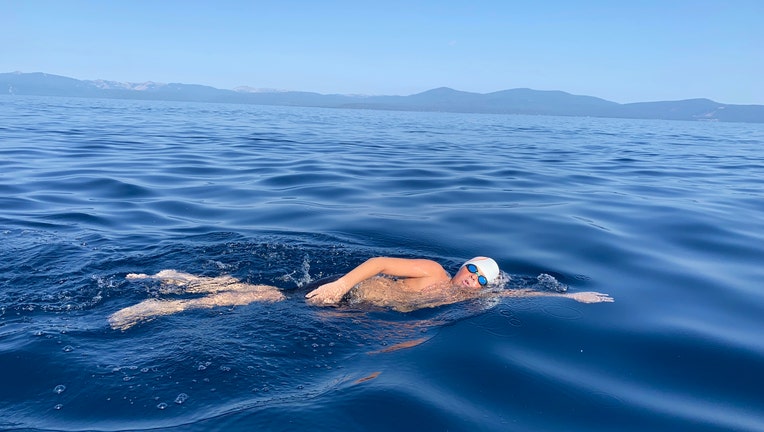 This Aug. 1, 2021 image provided by Jillian Savage shows James Savage, 14, of Los Banos, Calif. as he swam the entire 21.3-mile length of Lake Tahoe from South Lake Tahoe, California to Incline Village, Nevada. He became the youngest person ever to m (Associated Press)

James Savage of Los Banos completed the trip across the scenic lake, which straddles the California-Nevada line, in 12 hours on Aug. 1.

He earlier swam the other two legs of the Lake Tahoe Triple Crown, all 10 miles or longer.

Savage and his mother, Jillian, agreed the physical training was a lot easier than the mental endurance it takes to complete such a long-distance swim. The trip across the lake started in South Lake Tahoe, California, and ended in the Nevada town of Incline Village.

She said she knew after the first mile that he would get the job done.

"I had no doubts whatsoever," Jillian Savage told the Tahoe Daily Tribune. "He’s been swimming almost every day, six, seven days a week since he was 8. With open water, it’s just what he does. But mentally, even though it takes a whole bunch of us to make the swim possible, he’s really out there by himself."

James Savage said he enjoys swimming in pools, but they’re pretty much "all the same."

"Open water, you can swim in oceans, lakes, and you get to travel around," he said.

Last August, at age 13, Savage became the youngest to complete the 12-mile (19-kilometer) "true width swim." It’s also known as the "Godfather" swim because it starts on Tahoe’s west shore at the site of a mansion in Homewood, California, featured in the movie "The Godfather: Part II."

He also swam the 10-mile Vikingsholm route that traverses the southern portion of Lake Tahoe, known for its pine tree-lined beaches and ski resorts. 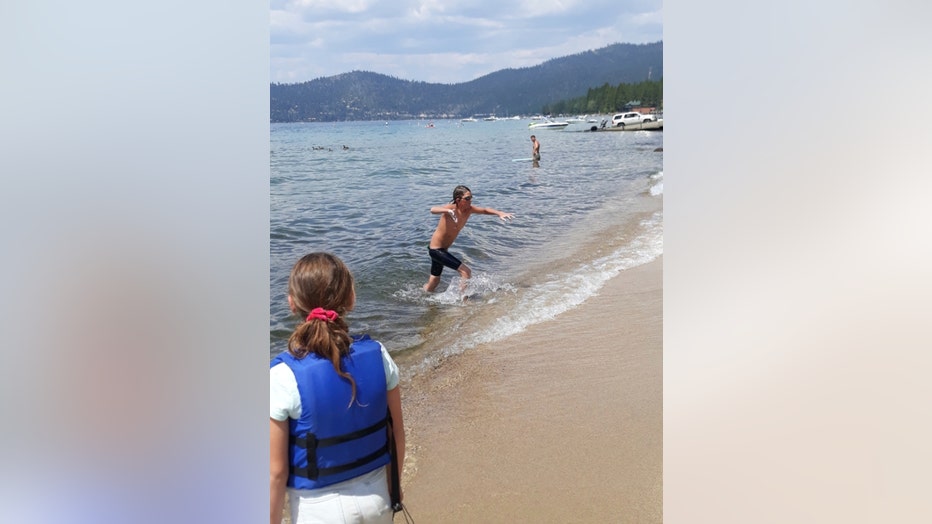 This Aug. 1, 2021 image provided by Jillian Savage shows James Savage, 14, of Los Banos, Calif. at Lake Tahoe on Aug. 1, 2021 as leaves the water after completing a swim of the entire 21.3-mile length of the alpine lake from South Lake Tahoe, Califor (Associated Press)

And at age 8, he swam from Alcatraz to San Francisco.

Mom’s biggest worry originally was he might abandon the trip after a few hours if it became monotonous.

"It’s not like he can sit and talk to us when he gets bored. His face is in the water and so really, he’s by himself," Jillian Savage said.

"But this time, he kept telling me, ‘Mom, I feel so much better mentally prepared this time.’ And he went out, and he just did such a great job," she said.

With the title of the youngest person to ever achieve the Triple Crown, James said he isn’t sure what he wants to do next.

"When he started this whole open water thing and he told me, ‘Mom, I want to swim from Alcatraz,’ and we kind of laughed in his face," she said.