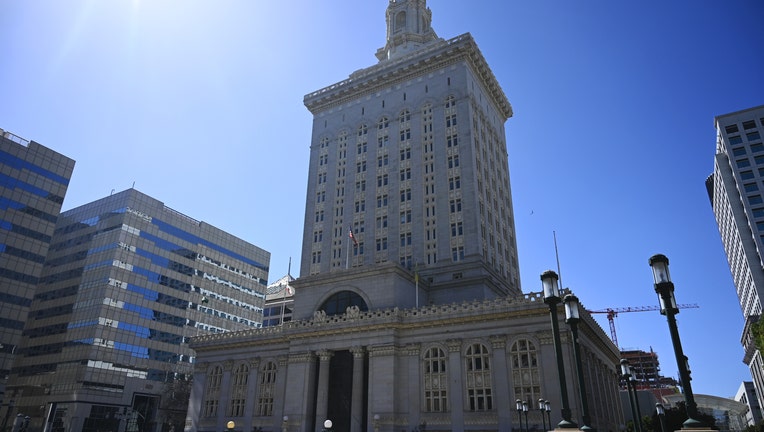 The outside view of the front of Oakland City Hall on a sunny day on April 9, 2021, in Oakland, Calif. (Samantha Laurey/Bay City News)

OAKLAND, Calif. - The Oakland City Council may pass a budget Thursday that redirects more than $17 million from the police department to the Department of Violence Prevention with the intention of improving public safety.

The City Council will hold budget discussions at 10:30 a.m. Thursday at a special City Council meeting and must pass a budget by June 30. If the council doesn't vote Thursday, a vote will be taken at a 1:30 p.m. meeting on Tuesday.

"This proposal does not reduce a single one of the new proposed budget investments, including those from the Reimagining Public Safety process," Schaaf wrote in a letter to residents.

"All Councilmember Taylor is asking his council colleagues to do is prioritize any new revenues to preserve existing levels of police services at a time when gun violence in Oakland has roughly doubled," Schaaf's letter said.

With concerns over public safety and gun violence in Oakland on the rise, Rev. Damita Davis-Howard, director of Oakland's Cease Fire program, says her program did not come from law enforcement, but community members. Their strategy seeks a positive impact with those who inflict gun violence on the community and its victims. They also try to give young people hope beyond their current circumstances.

Taylor's plan "can keep the Oakland Police Department from falling below the mere 717 officers we have today and reduce the current excessive levels of expensive and unsafe overtime work," Schaaf wrote.

Schaaf linked the remarkable cuts in gun violence in Oakland between 2012 and 2018 to the number of officers on the force. She said Oakland had 747 officers in 2018-19, when gun violence was half of what it was in 2012.

But following the murder of George Floyd by police in Minneapolis, many people in Oakland have been demanding that Oakland officials redirect a large part the city's police budget to alternative public safety measures.

Some are demanding a 50 percent reduction in the money police receive from the city's general fund and that money be spent on alternatives, other than police, that will prevent violence.

In fact, some contend that police don't prevent violence, they just respond to it.

Schaaf's proposal seeks about $650 million for police in the 2021-23 budget that may be voted on Thursday.

The more than $17 million that the City Council budget team is proposing to redirect to the Department of Violence Prevention would double that department's budget. It would also quadruple the amount the city allocates to the department from the general fund.

The added money would employ violence interrupters and community ambassadors in flatland neighborhoods.

"With increased violence across Oakland, council must act by addressing the roots of violence and poverty," Bas said.

Demands for a safer community reverberated at a Lake Merritt vigil to honor the victims of this past weekend's shooting. There were varying opinions on what role Oakland police should play in creating a safe community.

She said the city must do that by investing in prevention in the most dangerous neighborhoods as well as investing in housing, jobs, libraries, parks, and the arts. The city must also improve its system of policing that gets more guns off the streets and focuses "police response and investigations on serious and violent crime," Bas said.

"We need to address violence long before it happens, and as we re-open, we need to allow for permitted, organized events across the city for our residents, artists and culture workers," she said.

Bas and her team are also proposing to spend $4 million that would have been spent on police academies on piloting and eventually expanding the Mobile Assistance Community Responders of Oakland program, also known as MACRO.

MACRO is a non-police response to non-violent, non-criminal mental and behavioral health calls that police have responded to in the past. MACRO would begin with three teams serving East Oakland in the first year of service and expand to six teams citywide in the second year of service.