The installation is at 4th and Brannan streets.

SAN FRANCISCO - With construction on San Francisco's Central Subway expected to be completed next year, the San Francisco Municipal Transportation Agency announced this week that the first piece of public artwork along the line has been installed.

The piece, called Microcosmic, is a stainless steel wind-activated kinetic sculpture mounted on a 40-foot light pole near Fourth and Brannan streets--the site of a future platform station.

"It's exciting to see the impressive public art installation underway as a part of the Central Subway project," Tom Maguire, the SFMTA's interim director, said in a statement.

"This is an important milestone that shows the great progress our construction crews have made and reflects our city's commitment to creating welcoming and interesting public spaces," he said.

The sculpture was created by Bay Area-based artist Moto Ohtake.

Wings attached to the sculpture have been angled differently and are meant to create opposing rotations under windy conditions, allowing viewers to experience an infinite number of combinations depending on weather patterns.

Other works by Ohtake have been used for public art installations in cities like Santa Cruz; Stockton; Atlanta, Georgia; Dublin, Ireland; and Tokyo, Japan.

Ohtake's artwork is the first of 10 permanent public artworks to be installed along the Central Subway line, SFMTA officials said.

The art was procured with help by the San Francisco Arts Commission.

The Central Subway project, which will take passengers from the South of Market neighborhood to Chinatown, broke ground in 2012 and was initially set to be completed this year. However, due to construction delays, the project isn't expected to be completed until summer 2020.

After undergoing a year's worth of train service testing, the subway will then be open to riders by summer 2021, according to the SFMTA. 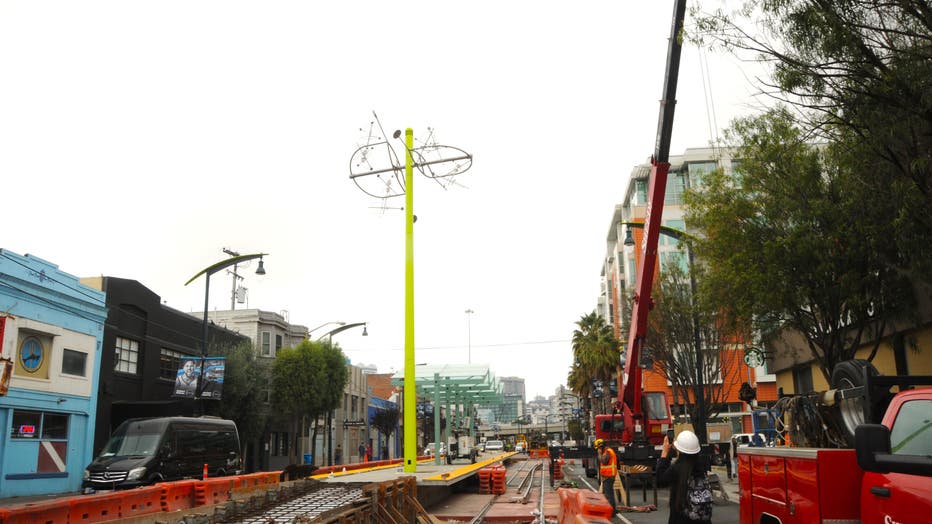