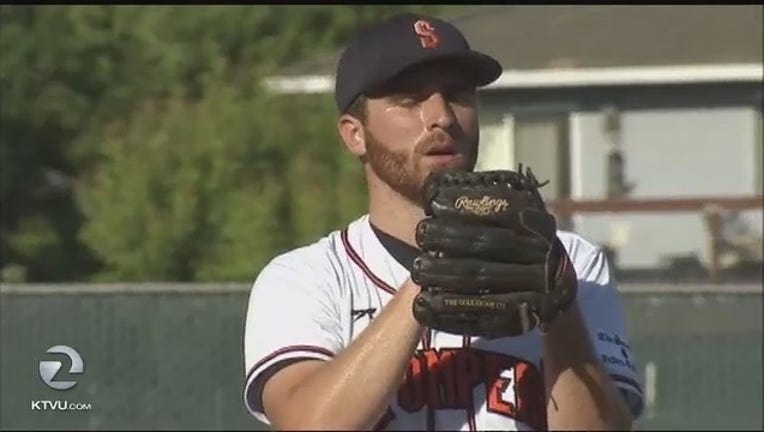 SONOMA, Calif. (KTVU) - It's not the big leagues, but a Sonoma County pitcher is making big waves as the first openly gay player in professional baseball.

Thursday evening, 23-year-old Sean Conroy made his first pro start on Arnold Field in Sonoma, before a crowd of about 400 fans.

His words were interrupted by an ice water bath over his head, drenching him and setting off cheers from his teammates.

A handful of professional players have come out as gay after their careers ended, but Conroy is the only active player to do so.

Conroy was recruited from New York, where he played college ball, and moved to Sonoma last month.

Thursday was "Pride Night" at the ballpark, which dovetailed with Conroy's desire to be open and honest about his sexual orientation.

On the field, the most telling sign of support were the rainbow stripe socks worn by his teammates.

They also cut the feet off the socks to create sleeves under their jerseys.

"To us he's just one of the guys," catcher Isaac Wenrich told KTVU, "it's crazy, in the locker room, he jokes around, he's just a regular person, so it's really cool that we can show him a little love too."

First baseman Tommy Lyons agreed, noting that there are undoubtedly major leaguers who are gay, but afraid to come out.

"We've all heard rumors of different players over the years," Lyons acknowledged,

"and it's unfortunate that there's still a bias today against that. He's just another one of the guys. That's how we see him."

The Sonoma Stompers are one of four teams in the Pacific Association of Professional Baseball.

Among Conroy's noisiest supporters in the grandstand: his host parents who house and feed him, and transport him to and from ballparks. The league is not affiliated with Major League Baseball or its farm system. It's small budget baseball with an abundance of passion, and big dreams.

Most of the fans were regulars at Stompers Games, but a few spectators said they'd come because of Pride Night and Conroy.

"Even the kids, they're wearing the rainbow wristbands," Grace Villafuerte of Santa Rosa told KTVU, "like it's normal, and that blows my mind. It's beautiful. Times have changed."

And at games end, with Conroy pitching all nine innings, to a 7-0 shutout of the Vallejo Admirals, everyone was on their feet cheering, their ace who happens to be an advocate too.

"I'm not active in the community yet, but maybe soon," smiled Conroy, "but I just love being out there. I hope people can follow my example."

At game's end, he had a line of local children waiting for his autograph.

"There's kids in the audience who will look at Sean and know he's brave enough to say it and he's good at baseball," noted his skipper, Fightmaster, "and they'll realize all that matters is that he's good at getting guys out."