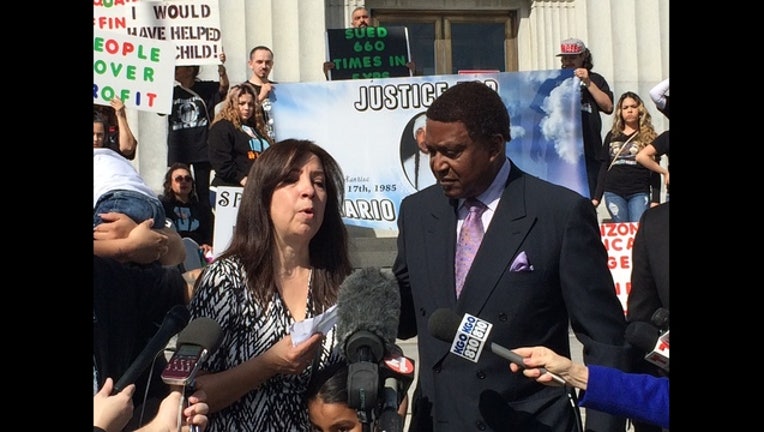 2 Investigates has been looking into Corizon and the circumstances surrounding the death of Mario Martinez, 29, for months, and has uncovered a series of controversial medical decisions, lack of oversight, money flowing to public officials, and nurses who say conditions at the county’s jails are poor.

Martinez suffered an asthma attack in his cell, collapsed, and died in a common area in July. Medical records show that, for several months, Martinez had been complaining of nasal polyps that were making it difficult to breathe. Despite multiple court orders requiring Corizon Correctional Health to treat the problem, Martinez suffered an asthma attack and died before the issue was ever fixed.

Martinez’s mother, Tanti, led a rally on the steps of a downtown courthouse Tuesday, demanding change in the county’s bidding process and reform at its jails.

“It cost my son his life that Corizon chose to ignore those court orders,” she said.  “Yes you're incarcerated, but that doesn’t mean you should die in jail. Nobody should go to jail and die.”

Martinez’s attorney John Burris said that Corizon, the Sheriff’s Department, and the County had all been aware of questions surrounding the company’s performance in Alameda County and nationwide.

2 Investigates discovered that Corizon has settled multiple lawsuits across the country for tens of millions of dollars. As recently as last year, Corizon settled for $8.3 million with the family of Alameda Co. inmate Martin Harrison, who was beaten and tased by ten deputies at the Santa Rita Jail.

“Corizon has had a history that has come to our attention, not only from this case but from other cases we have been involved in,” said Burris. “There is a real question of the adequacy of the medical care that has been provided by that institution.”

Martinez said she’s gone to the Board of Supervisors to demand that Corizon be prohibited from bidding on the upcoming contract, which is set to begin in July, but has been rebuffed.

“We’re in the fight for the long haul, no matter what it takes. We’re in it to bring about change and that’s what we’re going to go, God willing,” she said.

The county’s General Services Agency, which administers the bidding process for vendors, confirmed that four companies including Corizon showed up to a bidders’ meeting last week. Sheriff Ahern has previously told 2 Investigates that he considers the company “a good partner.”

At the time, he also addressed questions about whether there is a conflict of interest in his department overseeing Corizon’s performance at the same time he has accepting more than $100,000 in campaign contributions from the company.

“I don’t think so,” Ahern said. “You know, these people aren't my friends. These are my partners, we golf, so they do contribute to my campaign. So, I don't think there's a conflict of interest.”

The deadline for companies to submit proposals to the county for the open contract are due March 31, and a decision is expected in June.  The current contract for jail healthcare services held by Corizon expires on June 30. Tanti Martinez says she hopes to see the job taken out of Corizon’s hands.

“If you’re a healthcare provider, you’re supposed to be providing healthcare, then that’s what you do,” she said. “If you can’t do that, well then you’re in the wrong business.”