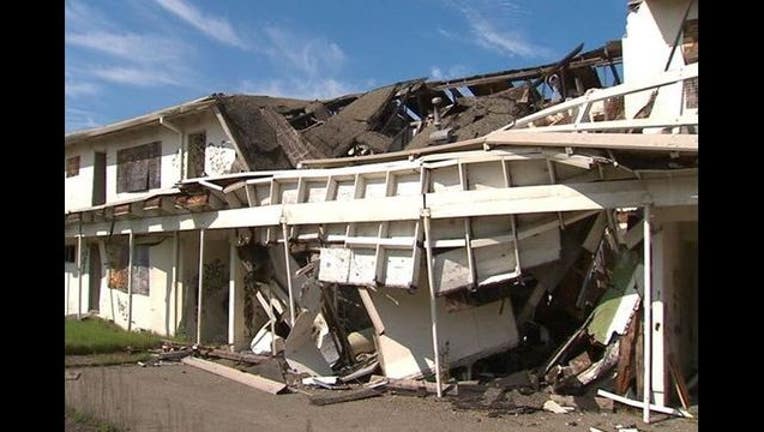 ALAMEDA - ALAMEDA, Calif. (KTVU) -- People who live on a former Navy base in Alameda are calling on the city to finally do something about more than a dozen vacant buildings that are now crumbling after years of neglect.  Neighbors say the abandoned town homes have become a magnet for crime and a hazard to anyone who goes near them.

More than an eyesore

Michele Alfaro told KTVU she has had a view of what looks like the aftermath of a natural disaster since she and her family moved into supportive housing at Alameda Point three years ago.

Ever since the Navy moved out in 1997 and handed over the property to the City of Alameda, Alfaro and others say the crumbling buildings which surround them have attracted a variety of problems to their neighborhood.

"They're hazardous to the children.  People prostitute in there and use drugs," said Regina Oliver, who has lived in the area for five years.

"All you gotta do is just walk under  there and tap against something, you could have the whole ceiling come down on you.  It's dangerous," said Oliver.

A records request with the Alameda Police Department revealed more than 240 calls for service to the area of Alameda Point known as the Main Street Neighborhood since the start of 2014.  However, police said the level of calls, ranging from vandalism to assault, was not significantly higher than other parts of the city.

Jim Knapp, a local contractor, contacted 2 Investigates and the City of Alameda about the poor condition of the abandoned buildings on Alameda Point.  Knapp, who says he's inspected hundreds of buildings, called the current state of the vacant town homes "shocking."

"If this was a private property owner, the city would come in, red tag the buildings, declare them a public nuisance. And I think within a week or two, they would have the bulldozers out here," said Knapp.

Two weeks after Knapp and 2 Investigates contacted the city, workers put up chain link fencing around the abandoned buildings.

"The last thing we want is to create any health and safety issues for the community that's out there," said Jennifer Ott, Chief Operating Officer for Alameda Point.

Ott told KTVU the City of Alameda has already spent $520,000 to tear down about half of the vacant buildings on Alameda Point. She says a lack of funding is the main obstacle to demolishing the remaining buildings on the former Navy base.

"It's a 900-acre property, there are a number of buildings out there that are vacant and the fastest and best way to try to ameliorate that is to try to put the project back into productive reuse and bring a developer there," said Ott.

Ott says the conditions are not an immediate threat to residents, thanks to the new fencing.

As for why nothing was done sooner?

"We are very glad someone brought this to our attention," Ott replied.

Earlier in March, Alameda City Council members unanimously approved a Neighborhood Specific Plan for Alameda Point which lays the groundwork for new housing in the area, but the city is still looking for a private developer to get involved.

"We are not going to stop looking for funds to tear those buildings down in the interim, but we're also going to work every day to try to bring private investment to the base as quickly as possible," said Ott.

Others, including Jim Knapp, are not convinced the new fencing around the vacant buildings isn't enough to keep residents safe.

"The research is out there that crumbling buildings do release airborne asbestos and these need to be abated as soon as possible," said Knapp.