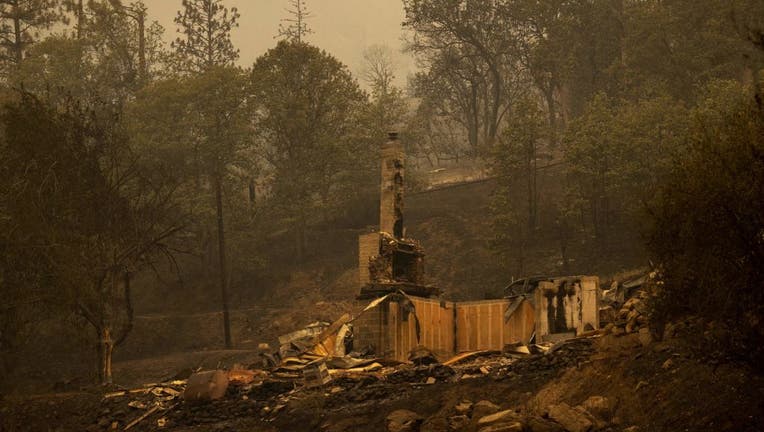 Property in the community of Klamath River lies in ruins after it burned in the McKinney Fire in the Klamath National Forest northwest of Yreka, California, on July 31, 2022. - The largest fire in California this year is forcing thousands of people t (Getty Images)

YREKA, Calif. (AP) - Two more bodies were found within the burn zone of a huge Northern California wildfire, raising the death toll to four in the state’s largest blaze of the year, authorities said Tuesday.

Search teams discovered the additional bodies Monday at separate residences along State Route 96, one of the only roads in and out of the remote region near the state line with Oregon, the Siskiyou County Sheriff’s Office said in a statement.

"This brings the confirmed fatality number to 4," the sheriff’s statement said. "At this time there are no unaccounted for persons." Other details were not immediately disclosed.

Two bodies were also found Sunday inside a charred vehicle in the driveway of a home near the tiny unincorporated community of Klamath River.

"It’s really tragic when a fire gets up and moves this fast and basically takes out a community. And that’s what happened in the Klamath River area," Mike Lindbery, a spokesperson with the fire’s incident management team, said Tuesday.

Authorities say two more bodies have been found within the burn zone of a huge Northern California wildfire, raising the death toll to four in the state's largest blaze of the year.

As flames raged over the weekend, Franklin Thom fled his home in the small city of Yreka where he grew up on the edge of a national forest in California. He made it to a shelter with his daughter and just his medicine, some clothes and his shower shoes. Unlike some others, he was told that he had escaped with his home still standing.

More than 100 homes, sheds and other buildings have burned in the McKinney Fire since it erupted last Friday. Rain helped firefighters as they worked to control the spread of the fire, but the blaze remained out of control, authorities said.

The Northern California wildfire has burned nearly 88 square miles, and is the largest of several wildfires burning in the Klamath National Forest. A smaller fire near the tiny community of Happy Camp forced evacuations and road closures as it burned out of control Tuesday. Still more fires are raging in the Western U.S., threatening thousands of homes.

In northwestern Montana, a fire that started Friday near the town of Elmo on the Flathead Indian Reservation has burned some structures, but authorities said they didn’t immediately know if any were homes. The blaze measured 25 square miles on Tuesday, with 10% containment, fire officials said. Some residents were forced to flee Monday as gusting afternoon winds drove the fire.

The Moose Fire in Idaho has burned more than 85 square miles in the Salmon-Challis National Forest while threatening homes, mining operations and fisheries near the town of Salmon. It was 23% contained Tuesday, according to the National Interagency Coordination Center.

And a wildfire raging in northwestern Nebraska led to evacuations and destroyed or damaged several homes near the small city of Gering. The Carter Canyon Fire began Saturday as two separate fires that merged. It was more than 30% contained by Tuesday.

California’s McKinney Fire grew to become the state’s largest wildfire so far this year after it was fed by weekend winds gusting to 50 mph.

"We’ve got the weather," said Todd Mack, an incident fire commander with the U.S. Forest Service. "We’ve got the horsepower. And we’re getting after it."

But lightning over the weekend also sparked several smaller fires near the McKinney Fire. And despite the much-needed moisture, forests and fields in the region remained bone-dry.

Among those waiting out the fire at the shelter in Yreka on Monday was Paisley Bamberg, 33. She arrived a few months ago from West Columbia, South Carolina, and had been living in a motel with her six children, ranging in age from 15 to 1-year-old twins, when she was told to evacuate.

"I started throwing everything on the top of my truck," but had to leave many things behind, she said.

Bamberg said she had just been hired at an Arby’s restaurant and wondered if it will survive the fire.

"There might not be much there when we get back," she said. "I don’t know if I have a job. The kids were supposed to start school and I don’t know if the school is still standing."

Bamberg added: "I’m trying to keep up my spirits. I have six little humans that are depending on me. I can’t break down or falter."

About 2,500 people were under evacuation orders but Thom said he knew many people remained in Yreka.

Thom has lived in Yreka all his life but said it was the first time he had been threatened by a wildfire.

Scientists have said climate change has made the West warmer and drier over the last three decades and will continue to make weather more extreme and wildfires more frequent and destructive.

The U.S. Forest service shut down a 110-mile section of the famed Pacific Crest Trail in Northern California and southern Oregon. Authorities helped 60 hikers in that area evacuate on Saturday, according to the Jackson County Sheriff’s Office in Oregon.