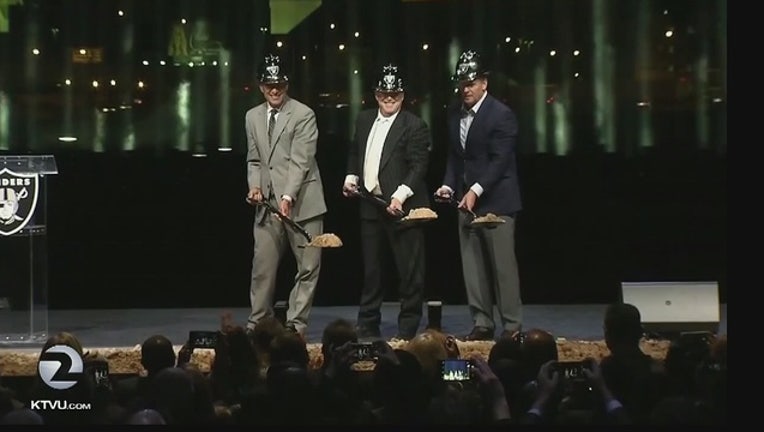 OAKLAND (BCN) Two Oakland City Council members said today that they want their colleagues to support them in filing a lawsuit against the Raiders and the National Football League over the football team's plan to move to Las Vegas.

The Raiders are still playing in Oakland but they broke ground for a new stadium in Las Vegas last November and hope to begin playing there in the fall of 2020.

City Councilman Noel Gallo, who was joined by Councilwoman Rebecca Kaplan and members of groups called "We Stand with Oakland" and "Forever Oakland" at a news conference in front of City Hall, said the council will meet with attorneys in closed session this afternoon to discuss filing a suit
against the Raiders and the NFL.

Gallo said several East Coast law firms are offering to represent the city of Oakland and Alameda County on a contingency basis in a potential lawsuit against the two entities without financial risk to taxpayers.

Kaplan said she's encouraged by the progress of a lawsuit the City of St. Louis filed against the Rams football team, which relocated to Los Angeles in 2016.

Raymond Bobbitt of "We Stand With Oakland" said St. Louis' lawsuit alleges that the NFL didn't follow its own relocation procedures when it allowed the Rams to move to Los Angeles and said a potential suit by Alameda County and the city of Oakland could be filed on similar grounds.

Last month, the Missouri Supreme Court denied the NFL's motion to have that suit dismissed on jurisdictional grounds.

Gallo said the city of Oakland could get at least $500 million in damages if it wins a suit against the NFL and the Raiders.

"Oakland can ask for $2 billion for what happened to our community," Bobbitt said.

Bobbitt said he hopes a suit by the city of Oakland and Alameda County would keep the Raiders in Oakland or at least force the NFL to place another team in Oakland.

He said, "We should stay firm because we've laid down for too long."

Kaplan said if the city was successful in the potential lawsuit, that money could be used for libraries, helping the homeless, fixing potholes and cleaning up illegal dumping.

"We don't want the taxpayers to be abused," she said.

Alameda County Supervisor Nate Miley and state Assemblyman Rob Bonta, D-Oakland, said in statements that they support the potential legal action against the NFL and the Raiders.

Bonta said he and Kaplan "believe that the reasonable and responsible decision is to take advantage of this incredible opportunity and begin exploring the legal action that the citizens of our community are
responsibly calling for."

Bonta said Forever Oakland and We Stand With Oakland have down their part and, "It is now imperative that we as civic leaders do our part."

The Raiders didn't immediately respond to a request for comment on the potential lawsuit.