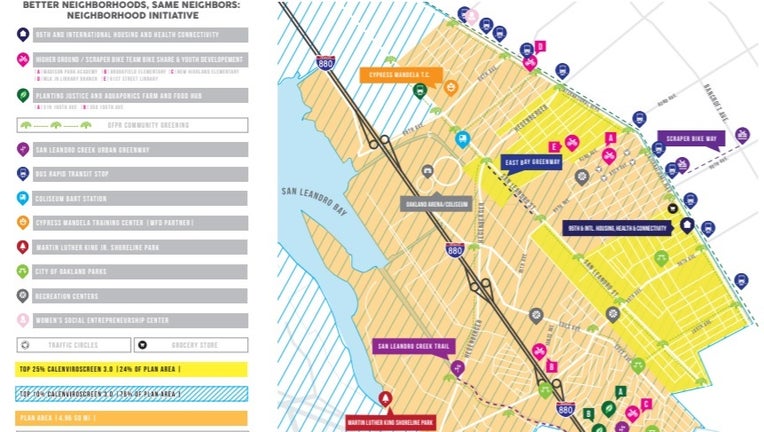 The projects include the construction of 55 units of affordable housing and a health clinic at 95th Avenue and International Boulevard, a trail along San Leandro Creek, the planting of 2,500 trees, the creation of a three-acre nursery and an expanded bike share program.

"We are so thrilled to announce $28.2 million for deep East Oakland," Mayor Libby Schaaf said.

"This has been a journey toward justice," she said, noting that it took about three years to get to this point.

It's what people in the streets have been marching for, Schaaf said.

The project was community-led, with about 13 groups coming together, according to Marquita Price, director of urban and regional planning at The East Oakland Collective, which works toward racial and economic equity in East Oakland.

"It's just the beginning," she said, though she didn't say what was next. The projects will be implemented over five years in five square miles of deep East Oakland from just north of 66th Avenue to just south of 105th Avenue.

Gavin Raders of Planting Justice, which helps people cultivate food sovereignty and work for economic justice and healing, said the three acres on the former Neishi Brothers site will produce 200,000 pounds of organic crops each year.

The bike share program will provide not just bikes, but bikes as an art form and a means of personal expression, Schaaf said.

"We need to continue this type of investment," said a representative from the East Oakland Black Cultural Zone, a collaborative that aims to keep the Black culture and a place for Black folks in East Oakland.

She said the community wants double or triple this type of investment.

Price said that a lot needs to be done first to break down equity barriers in the city's Planning Department, culturally and in the way planning is done, but added that it can be accomplished.

The grant East Oakland received is a competitive one through the California Strategic Growth Council, which works to achieve equity, sustainability, economic prosperity and quality of life for residents.