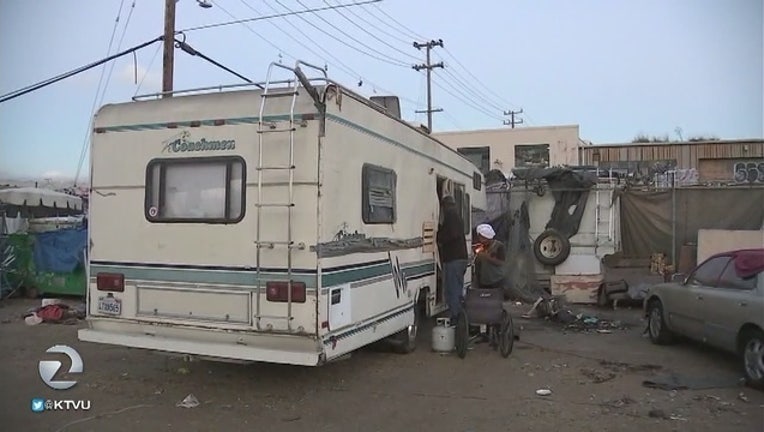 A new program will open four church parking lots in the coming months that gives homeless people living in their car a place to park overnight, hassle-free. This file photo shows a similar project in the city last year.

OAKLAND, Calif. (BCN) - Homeless people living in their cars in Oakland will now have a few new places to park overnight, hassle-free.

A new program launched by the Interfaith Council of Alameda County will open up four church parking lots in the coming months.

Security guards will stay overnight to keep people safe, and portable toilets and drinking and hand-washing stations will be set up for those who stay there.

During the day, ICAC will give the homeless services for case management, job development and employment training, according to officials, who announced the program Friday.

"This program will provide a secure, productive environment for vulnerable Oakland residents seeking to improve their lives and the lives of their families," Alameda County Supervisor Wilma Chan said in a news release.

Chan said she committed $50,000 from her office funds to launch the Williams Chapel Baptist Church site, which is near 10th Avenue and East 14th Street. That site will be the first to open.

Chan and others are hopeful that the additional parking will help alleviate Oakland's homeless problem.

There are requirements for those who want to park and receive services. Participants must be the registered owners of the vehicles they are living in. They also must be employed or attending college, according to the news release.

Those who take advantage of the program will be able to park in the lots for 90 days. Extensions may be granted "on a case-by-case basis," officials said in the news release.

Dr. Kenneth Anderson, Senior Pastor at Williams Chapel Baptist Church, said the church is excited to help the homeless in a new way.

"We are honored to be part of such a revolutionary endeavor to help those that are less fortunate by providing safe parking on holy grounds here at the chapel," Anderson said in the news release.

A news conference to announce the program is scheduled for 10 a.m. Monday at the Williams Chapel Baptist Church.