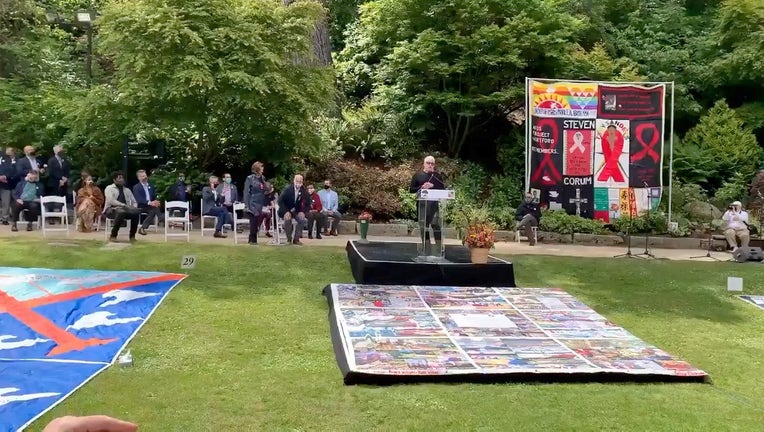 "My name is John Cunningham and I am a man living with AIDS."

Cunningham is the chief executive of the memorial. It honors the 700,000 lives lost to the disease. He was the first of dozens of speakers in the middle of the memorial, including Mayor London Breed.

"Those of you currently living with HIV, we appreciate you telling your stories and helping us to know there is more work that needs to be done," said Mayor Breed.

She and others stood at a podium surrounded by quilts, which are used to help spread awareness nationwide. The memorial revealed its 6,000th addition, each representing a victim of the epidemic.

"For the first time in a very long time in 2019, we saw only 166 new infections of HIV and that is really historic for the work that we're doing," said Mayor Breed.

Speaker of the House Nancy Pelosi also spoke after laying a wrath within the park's Circle of Life. She says advancements during the AIDS crisis helped experts make decisions for the COVID-19 pandemic.

"The network that was established, the science that was respected, the confidence people have that they can go be tested," said Speaker Pelosi.

The Emergency Use Authorization, or EUA, allowing the United States to administer vaccines for COVID-19 was born from the AIDS pandemic. The Biden Administration is now requesting to budget $670 million toward AIDS.

The Speaker says she fight is far from over.

"Pretty soon we're gonna put this in the museum," she said. "We just haven't gotten there yet, but we will, we made a decision that we will."