INGLEWOOD, Calif. - Inglewood Mayor James T. Butts held a news conference Thursday evening where he addressed the incident at Sunday's NFC Championship where an Oakland restaurant owner was beaten at SoFi Stadium's parking lot and is now in a coma.

There is security camera footage that has not yet been released from the incident. Mayor Butts said it shows Daniel Luna, 40, of Oakland mingling with fellow 49ers fans who were wearing red jerseys in the parking lot.

"It appears that the injured person, Luna, pushed the suspect from behind," Butts said. He said the suspect then retaliated and punched Luna once in the mouth area. "Mr. Luna fell to the ground where he was later found by security personnel, who summoned paramedics."

The parking lot confrontation is apparently with a Rams fan. The Rams fan pushed Luna back before the punch. The incident lasts less than five seconds.

"It looked like a small altercation that went very bad," Butts said. "From one punch and someone falling, hitting their head on the ground. It wasn't like you had people ganging up on somebody and beating them." 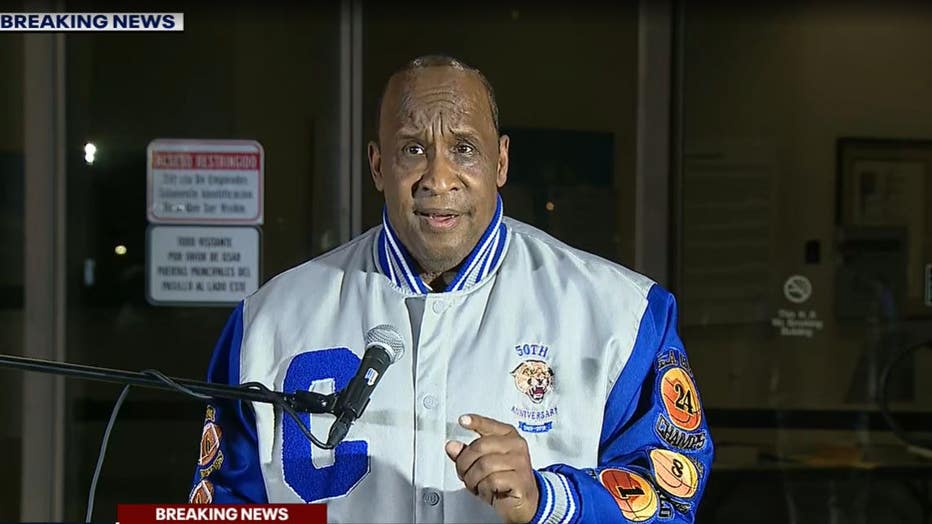 Mayor Butts had some information on the medical condition of Luna, indicating that his condition has not changed, that he was placed into a medically induced coma to prevent brain swelling and that he suffered facial fractures as a result of the assault. He remained at Harbor UCLA Hospital on Thursday.

Using the surveillance video, authorities also identified a vehicle associated with the suspect, saying he interacted with someone inside that vehicle. They are asking for that person to come forward with any information. Butts indicated the suspect was wearing a Rams jersey. The suspect remains at large.

Luna, 40, is chef and owner of Mistura, a Peruvian restaurant on Piedmont Avenue in Oakland.

49ers fan in medical coma was reportedly punched before fall

Investigators are focusing on a vehicle that may help them in the case of the 49ers fan beaten at SoFi Stadium Sunday. The mayor of Inglewood on Thursday said surveillance video exists of the incident and shows the suspect was retaliating against Daniel Luna of Oakland.

The news conference at some points seemed contentious when the mayor was pressed by reporters on the delay of this story coming out.

Butts said he only learned of the incident on Thursday when he knew a crime was committed and called the press conference. "We don't have a statement from the victim. We had no victim that said, ‘I was attacked.'"

Butts said he was notified when the video was located. He indicated the video may have been found Wednesday, which contradicts his earlier statement about when he found out about this incident.

The images of the suspect were said to be blurry and did not produce a suspect description. Butts only offered that it appeared to be a male, possibly "Hispanic or white." He indicated the video may be released at a future date.

In Oakland, Luna's friends comforted each other and tried to make sense of what happened.

"It's unthinkable to me in society where it could happen to someone so sweet and kind and generous like Daniel.  It makes me question why anyone would go to an NFL game," said Singer.

Security won't be increased because of the incident, the mayor said.

KTVU's Amber Lee and Associated Press contributed to this report.