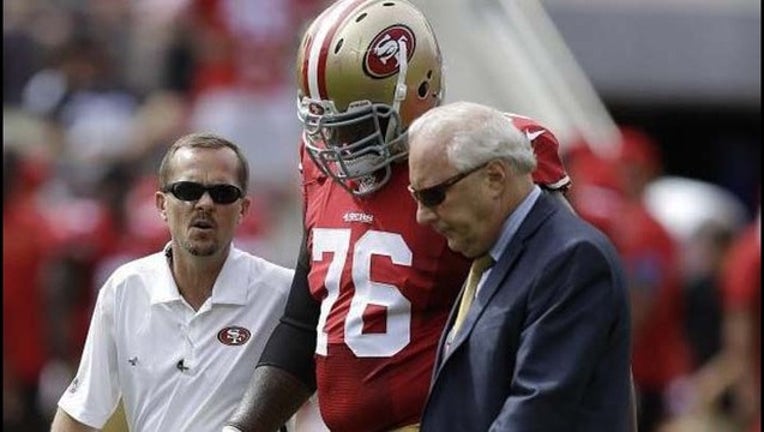 SANTA CLARA, Calif. (KTVU-AP) -- Right tackle Anthony Davis announced his retirement from the San Francisco 49ers in yet another shocking loss for the team this off season, and it was unclear whether the decision stemmed from his difficulties with a concussion last year.

The 25-year-old Davis informed the team Friday through his usual way of communicating: He sent a text message to coach Jim Tomsula before his old teammates practiced.

"After a few years of thought, I've decided it will be best for me to take a year or so away from the NFL. This will be a time for me to allow my brain and body a chance to heal. I know many won't understand my decision, that's OK," Davis said in a statement provided by agent Drew Rosenhaus. "I hope you too have the courage to live your life how you planned it when day dreaming to yourself growing up. Your Life is Your dream and you have the power to control that dream. I'm simply doing what's best for my body as well as my mental health at this time in my life. Sincerely, Anthony Davis."

"I can't say it was shocking at all," Tomsula said. "Anthony's been working on himself right now, that's what he's been doing. Anthony wants to step away. He wants to get his mind and his body right. That's where he wants to go, and he has the right to do that. We wish him the best."

On Dec. 4, he said he was able to drive home following a cross-country flight from New York in November despite feeling "loopy" from a concussion he didn't initially realize was so severe. Davis was experiencing symptoms after he took an elbow to the head during the Nov. 16 victory over the Giants. He missed the next four games before returning for the Niners' last two contests.

"It was a concussion. It's not fun. It's scary when your brain's not working the way it's supposed to. And the culture of this league is you're a big, tough guy," Davis said in December. "It was like a white fog, when you look out it's a white fog. Or (it's tough) just having a simple conversation. You just feel slowed down. It's scary, but that's only like the first three-four days you feel the intensity of it. Each day it gets better."

After the game, Davis posted on Twitter that former coach Jim Harbaugh hollered to get him off the field. The concussion happened on the second to last play of the game.

He tweeted: "I got a spinning elbow to the face. I was literally knocked out for a sec. I'm officially an NFL player now. ... I remember waking up to Harbaugh saying `get him up and off the field!, We don't want the clock to stop!' lol Can't make this (s---) up."

He missed the first three games of 2014 with a hamstring injury, returned for his season debut against Philadelphia on Sept. 28 only to suffer a left knee injury on the final play of the first quarter when quarterback Colin Kaepernick took a sack right into the back of his leg.

Davis was the 11th overall pick by San Francisco in 2010 out of Rutgers. He hadn't been with the team during offseason workouts.

San Francisco general manager Trent Baalke thanked Davis in a statement for his contributions to the 49ers and said the team "wishes him the best as he moves on from the game."

Davis had started all 71 games in which he had appeared, as well as eight playoff games.

"I'm shocked," center Daniel Kilgore said. "For whatever reason he did retire, I'm sure it's a good reason. I hate to see him go. I hope he's healed up good and hopefully one day he comes back to the game, if it's with us or another team. I wish him nothing but the best. I love Anthony Davis."