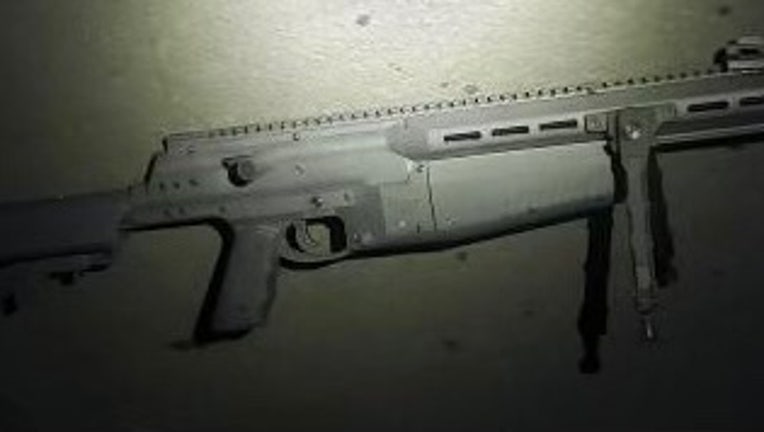 Robert Jones was allegedly carrying this archery rifle when he was shot during an encounter with Oakley police and Contra Costa County sheriff's deputies on March 22, 2022. (KTVU FOX 2)

DISCOVERY BAY, Calif. - Authorities on Friday identified the five officers who fired their weapons in the fatal shooting of a domestic violence suspect earlier this week.

Contra Costa County Sheriff's Sgt. Amanda Sears, 36, an 11-year veteran of the department; Deputy Antonia Powell, 35, a 13-year veteran; and Deputy Kevin Duke, 32, who has five years with the department, all drew their guns and discharged them on Tuesday night in Discovery Bay on Robert Jones, 51, who was killed during the confrontation.

In addition, Oakley police officers Sgt. Kevin Morris and Officer Tyler Radcliffe also fired their weapons when they were called out to Westport Circle to help with a "domestic disturbance," the department said.

A deputy initially tried to speak to Jones who was inside the home, but he brandished a knife over his head before pointing a weapon that looked like a rifle at law enforcement, the Sheriff's Office said.

The encounter became deadly a short time later when Jones allegedly emerged from the home, walking towards officers with the rifle raised.

After Jones allegedly ignored commands to drop the weapon, deputies and officers opened fire, according to the sheriff's office.

Jones was pronounced dead at a hospital.

KTVU has requested the body camera video and documentation of events as part of a California Public Records Act.

At least one of the deputies involved in the fatal shooting has been accused of excessive force before.

Sears was sued by Nancy Anderson of El Sobrante in a federal suit alleging the deputy woke her up on June 11, 2019, saying there was an emergency and she needed to be let inside.

Sears and other deputies searched Anderson's home for a man that she knew, but who didn't live there, for more than two hours without ever producing a search warrant, according to the suit.

Anderson's suit claims she was unconstitutionally held at gunpoint as there was no basis for a search of her home.

Sears, represented by Contra Costa County counsel, argued in her defense that there was no excessive force used and that Anderson was not unlawfully detained.

Sears countered that she showed Anderson the warrant on her phone and that they were seeking a violent criminal who might be at Anderson's house.

The next court hearing on this case is scheduled for April 21.