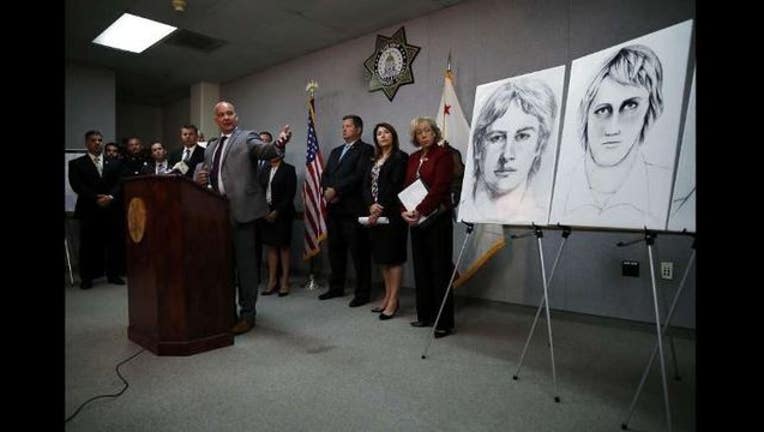 SACRAMENTO, Calif. (AP) - Authorities announced a $50,000 reward Wednesday as they renewed their search for an elusive serial killer they say committed at least 12 homicides, 45 rapes and dozens of burglaries across California in the 1970s and 1980s.

The case has grown cold for the killer known by at least four nicknames over the decades.

He was dubbed the East Area Rapist after his start in Northern California. The Original Night Stalker after a series of Southern California slayings. The Diamond Knot Killer for using the elaborate knot to bind two of his victims. And most recently the Golden State Killer.

He's linked through DNA and other evidence to more than 175 crimes between 1976 and 1986, officials said.

"This serial offender was probably one of the most prolific, certainly in California and possibly within the United States," Sacramento County Sheriff's Department Homicide Sgt. Paul Belli said at a news conference.

Authorities decided to publicize the case nationally in advance of June 18, the 40th anniversary of his first known assault in Sacramento County, he said. Aside from tips leading to his arrest, Belli said investigators are looking for clues that "there may be other crimes that have not been attributed to him...if he matches something that they've had in their community throughout the United States."

Aside from the reward for his arrest and conviction, the FBI also has a new website with maps locating the murders and rapes, sketches created by three witnesses, video interviews with investigators and audio interviews with two survivors. It also made him the number one option on its major crimes tip line, 800-CALL-FBI.

The FBI is launching a nationwide social media campaign and releasing an online mini-documentary and podcast at https://www.fbi.gov/sacramento .

It's the latest of numerous attempts to identify the man who started in 1976 and 1977 by terrorizing suburban bedroom communities east of Sacramento and as far south as Stockton and Modesto in the Central Valley.

The masked rapist, armed with a gun, would break into homes while single women or couples were sleeping. He would tie up the man and pile dishes on his back. He would then rape the woman while threatening to kill them if the dishes tumbled.

Sacramento County District Attorney Anne Marie Schubert recalled growing up at a time when children rode their bikes through the neighborhoods unsupervised and families rarely locked their doors at night.

"It was a time of innocence. And then in June of 1976, that all changed," she said. "A community was taken hostage."

Investigators believe the rapes, and dozens of burglaries often used to case neighborhoods, escalated in 1978 when he fatally shot U.S. Air Force Sgt. Brian Maggiore and his wife Katie as they walked their dog.

They believe he soon moved on to commit several rapes in the San Francisco Bay Area before heading to Southern California.

It wasn't until 2001 that new DNA testing linked him to at least six Southern California homicides between 1979 and 1986. In each case, the killer broke into a house at night and raped the female victim first.

Investigators believe he also committed another four unsolved Southern California homicides because of similarities in evidence or his methods.

If he's still alive, the killer would likely be between 60 and 75 years old, Belli said. He was described at the time as white, about 5 foot-9 inches tall and weighing 150 to 175 pounds with blonde or light brown hair — a description so broad that it hasn't helped solve the crimes.

"This subject has eluded investigators for over 40 years and the victims and their families deserve justice," said Monica Miller, the special agent in charge of the FBI region that stretches from Bakersfield to the Oregon border. "The victims and families...still bear emotional scars from this horrific experience."