What you need to know about the COVID-19 mu variant

The World Health Organization has identified the COVID-19 mu strain as a "variant of interest."

WASHINGTON - Three-quarters of adults in the United States have received at least one dose of a COVID-19 vaccine, the U.S. Centers for Disease Control and Prevention said this week — a notable milestone as the country faces a resurgence of new infections fueled by the delta variant.

The figure was marked Tuesday with White House COVID-19 Data Director Cyrus Shahpar saying on Twitter that 681,000 people had been newly vaccinated since Sunday. Shahpar added that between Sunday and Tuesday, a total of 1.51 million doses were administered.

The country hit the 75% milestone over a month after finally reaching President Joe Biden’s marker of 70% of adults with at least one shot — a goal he had hoped to achieve by July 4 but stalled due to vaccine hesitancy and waning demand.

The CDC’s vaccine tracker shows 64.3% of U.S. adults are now fully vaccinated. Among Americans 12 and up who are currently eligible to receive a vaccine, 62.3% of the population is fully vaccinated.

Vaccinations have picked up in recent weeks. The U.S. administered more than 826,000 doses on Tuesday, compared to 513,000 in early July, according to Our World in Data, a collaborative project between researchers at the University of Oxford and the nonprofit Global Change Data Lab. 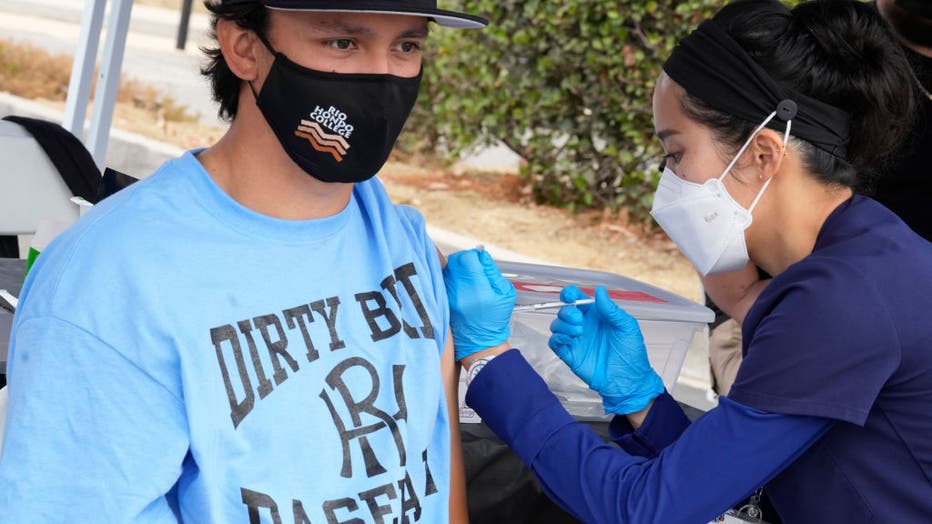 FILE - A nurse administers a COVID-19 vaccine to a Rio Hondo baseball player during a coronavirus vaccination clinic at Rio Hondo College on Sept. 1, 2021, in Whittier, California. (Photo by Keith Birmingham/MediaNews Group/Pasadena Star-News via Get

A renewed urgency to vaccinate the population has come amid the spread of the highly contagious delta variant of the coronavirus, which has fueled a surge of new cases, hospitalizations and deaths — largely among the unvaccinated.

Over Labor Day weekend, the U.S. saw nearly four times as many COVID-19 cases compared to the same time period in 2020, according to the University of Oxford.

On Sept. 5, 2020, the country’s weekly average number of new daily COVID-19 cases was 41,488, data shows. A year later that number rose to 163,728 — nearly four times the amount. Deaths were also nearly twice as high compared to a year ago, according to the same chart.

The FDA warns people not to take the drug ivermectin, used to treat parasites in livestock, to treat or prevent COVID-19.

The CDC says the current vaccines remain highly effective at preventing severe disease and death, including against the delta strain. But the agency in late July recommended fully vaccinated people once again wear masks indoors, citing emerging data showing the delta variant is more infectious and can lead to increased transmissibility when compared with other variants, even in some vaccinated individuals.

In addition to the now-dominant delta variant, experts say breakthrough infections may also be a combination of waning immunity from those who were vaccinated eight months ago and fewer community mitigation measures to stop the spread.

U.S. health officials have also announced plans to administer COVID-19 booster shots to all Americans to shore up their protection, pending U.S. Food and Drug Administration and CDC approval.