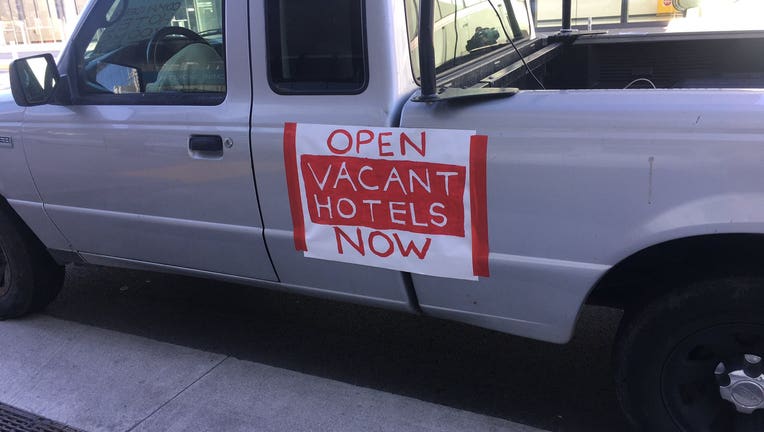 SAN FRANCISCO - San Francisco's Board of Supervisors on Tuesday unanimously approved an emergency ordinance requiring the city to secure at least 8,250 hotel rooms for three affected groups amid the stay-at-home order, with 7,000 reserved for the city's homeless.

In addition to the 7,000 rooms for shielding the city's homeless residents from the coronavirus, the city would provide 500 rooms for discharged hospital patients and 750 for frontline workers. Also, the rooms must be acquired by April 26, according to the ordinance.

The city has maintained it will only provide hotel rooms for homeless people in the shelter system and for single-room-occupancy hotel residents who either have tested positive for COVID-19 or may have been exposed; homeless people who are over 60 or have underlying health conditions, regardless if they're living in shelters or on the streets; and first responders who need to quarantine.

Supervisors Shamann Walton, Matt Haney, Hillary Ronen, and Dean Preston, initially jointly introduced the ordinance before an outbreak at a homeless shelter resulted in more than 90 people having tested positive for COVID-19.

The city has said it will now convert the Multi-Service Center South shelter into a medical facility.

Ronen has criticized the city's continued use of congregate settings like shelters to house homeless people amid the pandemic.

"We have approximately 5,600 people that are living on the streets and in shelters that could care for themselves, and the fact that we haven't had the urgency and are not spending our time, our energy... to move those people into a hotel room, I believe is wrong from every which way you look at it," Ronen said at the meeting.

"We have tried to do this through partnership, but legislation is absolutely required," Haney said. "I know that there has been movement. I know there are new commitments from the administration, from the mayor, but it's not clear enough, it's not fast enough, it doesn't have a timeline, it doesn't have regular reporting and it isn't clear enough about the population that will be served," he said.

On Monday, Mayor London Breed said despite hotel rooms across the city being vacant, staffing remains one of the biggest challenges in securing hotel rooms for the city's homeless residents, many of whom have addiction or mental health needs.