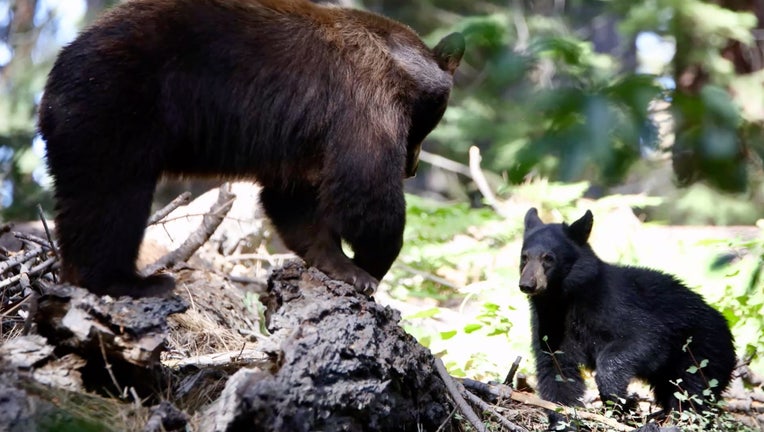 In California, Black Bears are mostly brown. At birth, cubs have no fur, and survive completely off the warmth of their mothers. Cubs stay with their mother for 17 months.

TAHOE CITY, Calif. - A mysterious disease has stricken several young black bears captured in the Sierra Nevada, and one telltale sign is their fearlessness at being around humans.

California veterinarians said in the past 12 months, officials have captured four bears with encephalitis, which can be caused by a body’s immune system attacking itself, the Sacramento Bee reported Saturday.

The bears with dangerously inflamed brains have been found on the Nevada side of Lake Tahoe and as far away as Humboldt County.

Bears normally shy away from humans, but a sickly, confused female bear captured last fall in Pollock Pines showed no fear of the people who took pity on it and began feeding it. At one point, it hopped into an open car trunk, state wildlife officials said.

The bear was covered in ticks when it was eventually taken to the California Department of Fish and Wildlife’s lab.

Like almost all of the bears captured with the same symptoms, which include head tremors and a subtle head tilt, the bear was so sickly, veterinarians had to put it down.

Scientists have discovered five new viruses in some of the bears with the symptoms, but they have not determined whether the viruses are to blame for the disease.

The new viruses don’t appear to pose a risk to people, said Jamie Sherman, a veterinarian at UC Davis’ One Health Institute who has studied bear diseases.

Black bears are not endangered. Whatever is sickening the bears has been sickening them has not affected their population, which is estimated to be between 30,000 and 40,000.