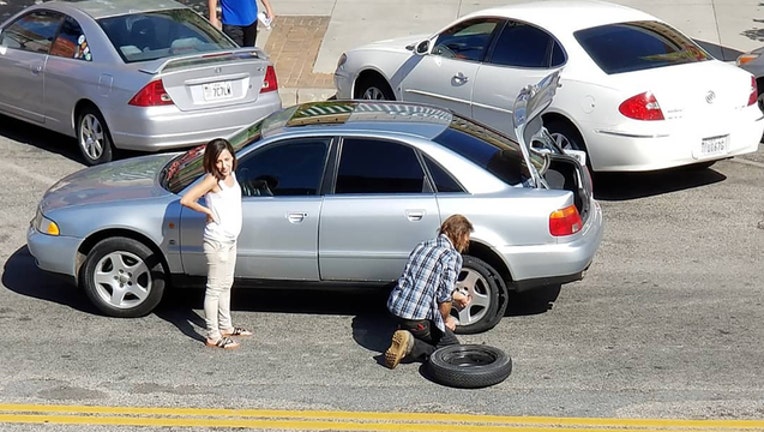 A homeless Utah man who changed a tire for a woman is challenging the stigma surrounding homelessness, according to a store owner who snapped a photo of the kind act. (Photo: Anna Davidson via Jessie Jean’s on Historic 25th)

OGDEN, Utah -  A homeless Utah man who changed a tire for a woman is challenging the stigma surrounding homelessness, according to a store owner who snapped a photo of the kind act.

Anna Davidson owns Jessie Jean's on Historic 25th and Black Lotus Coffee Roasters in Ogden, Utah with her husband Ron, and they live above their cafe.

On Sept. 23, Ron spotted Chuck, a homeless man who helps around the couple's cafe, helping a woman who was stranded by a flat tire. "Hey, look at Chuck out there changing that girl's tire," Ron said, according to Anna, who then took a picture of the interaction.

Anna said the woman was in the middle of the road and blocking it.

"People were driving past her and no one stopped," she said, adding that Chuck just walked out of the cafe, asked the woman if she had a spare tire and helped her.

"I looked out and I'm like, why does that not surprise me. He's a good guy," Anna said. "So I walked over and snapped that photo."

She said she then posted it online on the cafe's Facebook page.

"Looked out the window to see this happening. This is Chuck... he's homeless and works his [expletive] off helping every day in the cafe," the post read. "This is ‘one of those people' that get labeled. Ya know the ones everyone wants outta sight, outta mind."

"I didn't see anyone else out helping this young lady, just Chuck... the homeless guy... thank you Chuck," the post said, along with the hashtags #findthekind and #kindnessmatters.

Anna said she hopes the photo and Chuck's story will "bring awareness to the stigma surrounding homelessness, mental health and addiction."

"Our system is truly broken and I desperately want to be part of making effective positive change," she said. "Chuck is a great guy, but the truth is there are thousands of Chucks out there."

Anna said she "literally had no idea that the photo would blow up like that."

"And the reality for me, and for Chuck and for everybody else out there, just show people that we have to re-humanize ourselves to each other and stop being so judgmental... we have to change the way we do things and it has to start grassroots," she said.

Anna said her husband, Ron, is the driving force in her life to advocate for the homeless population, because he too was homeless for two-and-a-half years at a point in his life. Ron battled addiction, mental health issues, and is a trauma survivor from abuse from his stepfather, she said.

"And here he is a business owner and a husband and a person I look up to, so I treat every person who walks through the door with the same respect..." Anna said.

Chuck is currently working on his food handler's permit, she said.