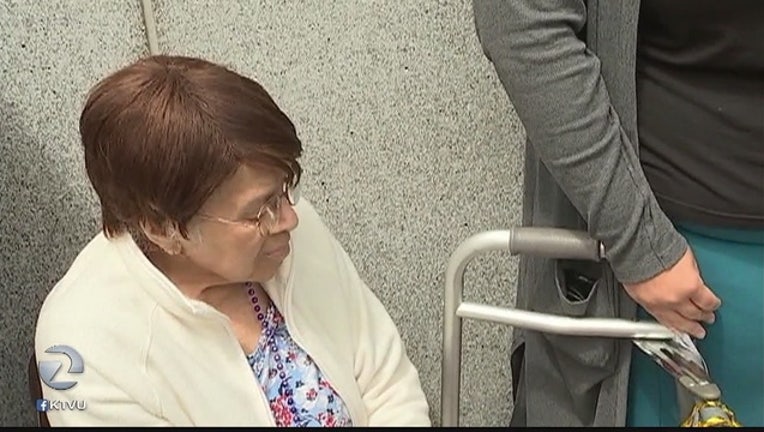 SAN FRANCISCO (BCN)— Housing rights activists today demanded that the San Francisco District Attorney file elder abuse charges against the owners of an apartment building in San Francisco's Lower Haight neighborhood, accusing the owners of attempting to evict a centenarian who has lived in the building since the
1950s.

The demand comes after a judge found that Iris Canada had failed to pay court-ordered attorney's fees Wednesday, granting the owners of 670 Page Street the right to evict her.

The ruling is the latest in a legal battle between Canada and her landlords, which has been going on for years.

Canada, who just turned 100 years old last month, was granted a lifetime estate to the apartment in 2005, allowing her to stay for the rest of her life, while the rest of the building underwent an Ellis Act eviction and five other units were sold as tenancies-in-common.

However, property owners Peter Owens, Stephen Owens and Carolyne Radishe, moved to terminate that lifetime estate and evict Canada in 2014, alleging that she had been living with family members since 2012 and had neglected the apartment for so long that the utilities were shut off and it became uninhabitable.

"It is a crime to harass and stress and cause financial and emotional abuse to elders," activist and organizer Tiny Gray-Garcia said today outside the Hall of Justice.

"We're here today to demand as a community that Gascon's office actually stand up and do the right thing for a San Francisco resident of this city for generations; a black San Francisco resident that is potentially being kicked out to make way for other people who happen to be in the tech industry or have more money."

"This is another reflection of the unjust treatment of black people in this town," President of the NAACP San Francisco branch Rev. Amos Brown said. "It's time San Francisco search it's soul."

In April, the court found in the landlord's favor, ruling that Canada could stay in her apartment only if she accepted strict limits on her occupancy and paid the property owners' attorney's fees, which total more than $150,000.

An attorney for the property owners, Mark Chernev, said the owner would drop the demand for legal fees and let Canada stay if she agrees to sign paperwork allowing the building to convert to condos.

"The owners are extremely disappointed to hear of the most recent action taken by Ms. Canada, now almost two years after this litigation began.

The elder abuse allegations being rallied are ridiculous and wholly without merit," Chernev said in a statement.

Chernev also said that because Canada had not been living in the unit since 2012, her conditional life estate was terminated and she no longer has any rights or interest in the property.

The case is not about money, according to Chernev, but more about Canada's cooperation with the condo conversion.

"For the past four months the owners have agreed to vacate the judgment, restore the life estate, waive all money arrears, and permit Ms. Canada to return and live the remainder of her life at Page Street. Her cooperation with the conversion will have absolutely no impact on the life estate or her ability to live at Page Street, and will also benefit the neighbors she had relied on for years," Chernev said.

Canada is refusing to sign the papers and asking the owners to sell her the unit at a discounted price.

"Who is being taken advantage here?" Iris Merriouns, Canada's niece, said of the lifetime estate. "I believe she has a right to buy the unit."

The property is not for sale, however, Chernev said.

Canada's attorney Dennis Zaragoza planned to file a motion Friday seeking to dismiss previous court rulings on the grounds that they were made at a time when the case was technically in federal court, and outside the state court's jurisdiction. That motion, however, was rescheduled for Wednesday at 9:30 a.m., according to Zaragoza.

"The owners are still optimistic that Ms. Canada can return, and intend to hold off on any recovery to permit Ms. Canada a final opportunity where the judgment can be vacated ... and Ms. Canada can live the remainder of her life on Page Street pursuant to her life estate - which has long been the intent of everyone," Chernev said.