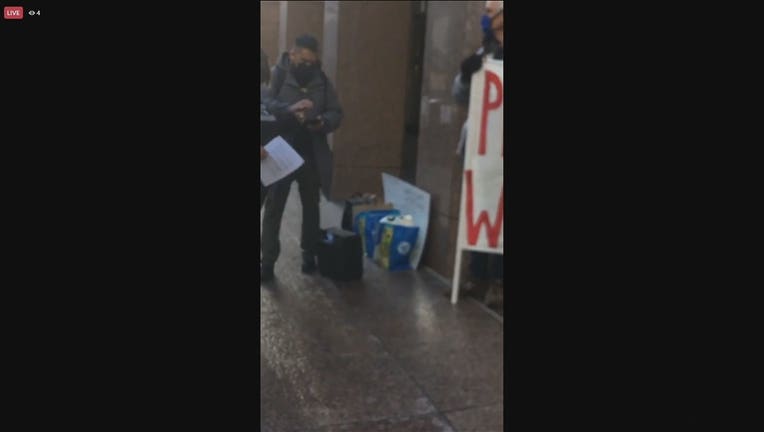 About a dozen people from groups including Critical Resistance, the Anti-Police Terror Project, the Ella Baker Center for Human Rights, Restore Oakland and the American Friends Service Committee held a sign that read "People Can't Get Well in a Cell"

SAN FRANCISCO - A group of activists protested a pending legal settlement aimed at improving the mental health care inside Santa Rita Jail on Thursday, as news of another death occurred inside the Dublin facility.

Lt. Ray Kelly said the man, who was housed in Behavioral Health Housing Unit 1, was found "unresponsive" in his room on Wednesday and he was pronounced dead at 4:20 p.m. There were no signs of assault, suicide or foul play, he said.

This brings the in-custody death total to seven this year, according to a KTVU analysis, and the 56th person to die at Santa Rita since 2014.

Meanwhile, about 20 people from groups including Critical Resistance, the Anti-Police Terror Project, the Ella Baker Center for Human Rights, Restore Oakland and the American Friends Service Committee stood in the rain, holding a sign that read "People Can't Get Well in a Cell" in front of the law office of Rosen, Bien, Galvan & Grunfeld at 101 Mission Street. One person dressed as the Grinch was also there.

The activists are concerned with a legal settlement, called a "consent decree," which is supposed to be approved by a federal judge on Jan. 19.

The agreement in the case, called Babu V. Ahern, will increase staffing at the jail with the aim of providing better mental health care, counseling, screening and classifications at Santa Rita.

With that agreement comes more money allotted to the jail, which is what the activists oppose. In May 2020, the Board of Supervisors approved the sheriff’s request for an additional $318 million over the next three years to fund Santa Rita Jail. The supervisors noted that more staff would be needed to fulfill the reforms required by the lawsuit.

"The best way to address the harms caused by incarceration is to invest in community care, not jail expansion," the Ella Baker Center said in a statement.

Instead of funding jail construction, the activists said that Alameda County should fund a proposal for third-party mental health care provided by community-based organizations and providers who already have relationships with people impacted by the jail.

And the activists also said they want the judge to reject the current settlement that increases county spending for the jail and demand a revised settlement that strikes the hiring of additional deputies from the plan.

In an interview, Jeff Bornstein, an attorney at the law firm that negotiated the consent decree, said his 2018 class-action suit addressed improving the mental health conditions of those at Santa Rita Jail. And the proposed settlement will mandate the better coordination of mental health care, preventing punitive isolation measures to curb suicides and curbing the use of unnecessary force, among other reforms, he emphasized.

That said, Bornstein also said he completely agreed in concept with the activists: The U.S. criminal justice system is broken and police, prosecutors and judges should re-think what to do with people who are accused of committing crimes, other than locking them up.

However, he said, that is a societal issue that is not in his scope of practice.

"We totally agree," Bornstein said. "Jail is the worst place for someone who is mentally ill. Locking people up and throwing them in cages is terrible. But so long as we are continuing to have jails and prisons there needs  to be humane conditions of confinement. And that is the crux of our case."