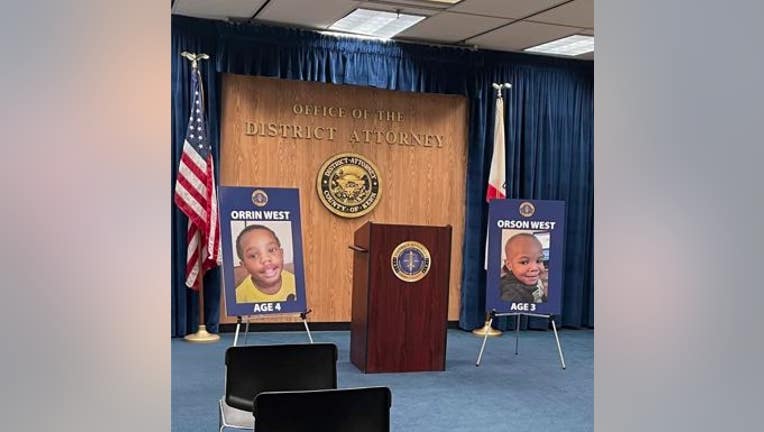 The adoptive parents of two small California boys who were reported missing in 2020 have been charged with killing the children, although their bodies have not been found, authorities said Wednesday.

Trezell West and Jacqueline West were arrested Tuesday night on murder and other charges in an indictment returned by a grand jury, Kern County District Attorney Cynthia Zimmer told a news conference in Bakersfield.

Orrin West, 4, and his brother Orson, 3, were reported missing from their family’s backyard in the desert town of California City on Dec. 21, 2020. A huge search by law enforcement agencies and community members failed to find them.

The district attorney said she was not permitted to reveal any facts of the case until the trial.

The grand jury heard testimony from 50 witnesses over three months.

Zimmer said that a combination of direct and circumstantial evidence was presented, and the grand jury was convinced that the boys were dead.

"I would like to emphasize that the fact that law enforcement has not found their bodies does not preclude a murder prosecution," Zimmer said. "As a matter of fact, there have been many, hundreds of what we call no-body homicides prosecuted across the United States successfully."

Both parents were being held without bail on two counts of second-degree murder, two counts of willful cruelty to a child and a count of false report of an emergency.

Arraignment was scheduled for Thursday in Kern County Superior Court. Zimmer said it won’t be known who the couple’s attorneys will be until the court appearance.

The family has four other children, two of them also adopted, and all are in protective custody, Zimmer said.

Zimmer said that a week after the boys were reported missing "crucial information came to light" that brought in the involvement of police in Bakersfield, about 60 miles west of California City.

The district attorney did not reveal anything about that information. But it is known that the family lived in Bakersfield before moving to California City in September 2020.

Asked if Orrin and Orson had actually ever been in California City, Zimmer said "that’s something we’re going to answer during the trial."

Police and FBI agents searched a field in Bakersfield in March 2021, but the results of that effort were not revealed.

"We now realize that the search for the boys began after the real tragedy had already occurred. ... This is not a resolution in this case and there will not be a resolution completely in this case until these boys are brought home," Bakersfield Police Chief Greg Terry said.