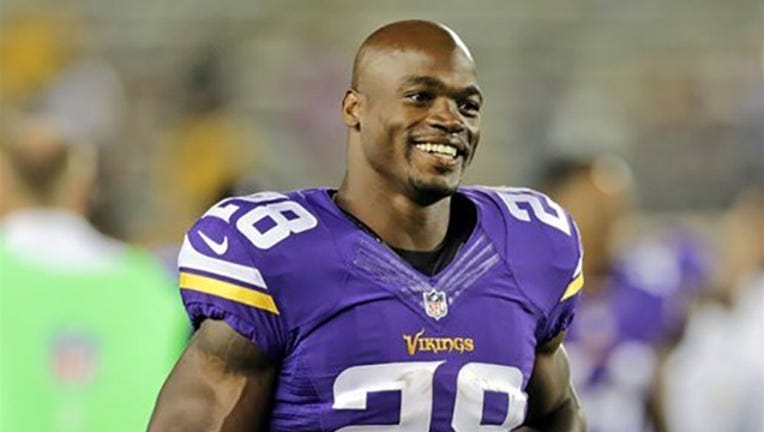 MINNEAPOLIS (AP) — Adrian Peterson is coming back to the Minnesota Vikings, telling The Associated Press that he will participate in the team's voluntary practice on Tuesday and still has love for his team after nine months away.

Peterson sent an e-mail to the AP early Tuesday morning saying he's excited to put on a uniform again after missing the final 15 games of last season while addressing child abuse charges in Texas. He also skipped the team's voluntary practices last week while openly lamenting the fact that the final three years of his contract are not guaranteed.

"I've been away from the game for an entire season," Peterson wrote to the AP. "I wanted the chance to be around the players and coaches, the guys that really matter to me."

After skipping the three practices last week, Peterson tweeted that he was looking for more long-term security on a contract that has three years and roughly $45 million left on it, none of which is guaranteed. He told the AP that a family commitment caused him to miss the workouts, but also said "it's normal procedure for any player in my position to want to secure his future."

Peterson's agent, Ben Dogra, told The Associated Press they have received no assurances from the Vikings that changes to his contract are on the table.

The relationship between the team and its franchise player has been tense dating back to September, when the child abuse allegations first surfaced. He spent much of the season on the commissioner's exempt list while his case unfolded and he was angered by a perceived lack of support from some members of the organization, namely COO Kevin Warren.

Suddenly, Peterson says he's ready to put all of that behind him.

"I understand this is a business. Clearly there were a lot of emotions involved, but I will only be better from the situation," Peterson wrote. "I have a role to play and the Vikings have one as well. It's time to move forward and put my energy and focus on preparing for the season."

Peterson pleaded guilty to a misdemeanor for striking his 4-year-old son with a wooden switch while disciplining him, and his agents initially pushed for a trade once he was reinstated from his suspension. The Vikings maintained all along they had no plans to trade the former NFL MVP, believing that his presence could help turn a team that finished 7-9 last year into a playoff contender.

Once the draft came and went last month without a deal, the focus shifted toward his contract.

The 30-year-old Peterson will have his $12.75 million salary for 2015 guaranteed in Week 1, but all bets are off after that. The Vikings declined to comment on Peterson's decision to return to the team.

"I have an agent who handles any contractual questions or business-related questions, but it's normal procedure for any player in my position to want to secure his future," Peterson wrote in his email.

It's been a whirlwind few weeks for Peterson and the Vikings.

Just a week ago, there appeared to be the makings of a bitter contract dispute developing between a franchise wondering exactly what it was going to get from a player who missed almost an entire season and from a player still harboring resentment toward the league and the team for the convoluted way his discipline unfolded.

Peterson was the only player absent from the voluntary practices last week, prompting speculation that a prolonged holdout could be in the works.

"He can play for us, or he can not play," Zimmer said. "He's not going to play for anybody else and that's just the way it's going to be."

Zimmer and Peterson talked not long after those pointed comments, and days later he was on a flight from Houston back up to Minneapolis to put the No. 28 jersey on for the first time since the 2014 season opener in St. Louis.

"I love my teammates," Peterson said. "We have a great group of young players and a solid coaching staff and I'm excited to get back on the field with those guys and play in front of the fans again."

Dogra said Peterson has been eyeing Tuesday as a return date for "several weeks."

"He wants to join his teammates and he has a great relationship with Coach Zimmer." Dogra said. "It's been a tough time for everybody, but he wants to move forward and focus on the 2015 season. That was always his goal. He always wanted to be in a position not to miss any games."

Despite the considerable drama that has surrounded Peterson for the last nine months, teammates said last week they were eager to see him back on the field.