An Afghan family who was forced to flee the Taliban's hail of bullets has now resettled in Hayward, leaving the relatives – who are journalists, pizza shop owners and teachers – to rebuild their lives after leaving nearly everything behind.

HAYWARD, Calif. - An Afghan family who was forced to flee the Taliban's hail of bullets has now resettled in Hayward, leaving the relatives – who are journalists, pizza shop owners and teachers – to rebuild their lives after leaving nearly everything behind.

"We're confused about our future," said "Ahmad" Seyar Wahidy, 26, a computer science major who also worked as a travel agent.

He spoke on a recent afternoon alongside seven other relatives who all fled Aug. 25 from Taliban gunmen, who fired bullets into their home, killing their gardener.

All of them detailed harrowing tales and provided tragic videos of the Taliban firing their weapons, sleeping on the road at the Kabul airport for three days until a plane could airlift them out; and spending nearly two months at the Fort Bliss, Texas, military base where they said scorpions crawled on them as they tried to sleep uncomfortably on cots.

Still, the extended family said they are grateful to be on safe soil.

Less than two weeks ago, they ended up in Hayward with a view of the rolling hills, which remind them a bit of Afghanistan, in a home provided by AirBnB free for one month.

"We were forced to leave Afghanistan," said Sarah Fazili, 30, a mother of two and a feminist radio journalist. "The Taliban came to the back of our house and started shooting because we work with the Americans. We love Afghanistan. But the Taliban are very bad. They don't have a heart. There is no way to go back."

She paused for several moments as she recounted her story, holding the tears back as they welled up in her eyes.

When she talked about what the Taliban would do if they caught up with her, she sliced her hands across her neck, illustrating that they would kill her and her family because they worked in media, fought for women's rights and served in the military alongside the Americans.

An Afghan family had to flee from gunfire fired into their Kabul home by the Taliban. They have now resettled in Hayward.

A comfortable life in Kabul

The Fazili family had a comfortable life in Kabul.

Sarah Fazili was not only a radio reporter talking about feminist ideals, but she also worked for the International Relief Development. Her husband, Ajmal Fazili, 36, was a video editor for a TV station. Her mother taught girls, often secretly, empowering them to become educated.

Her other relatives worked for the U.S. Armed Special Forces; another cousin owned his own pizza shop. Her two girls, 3 and 7, attended school.

"We had a good life," she said, speaking partly in Dari and partly in English. "We are educated."

And they had to leave nearly all their belongings and personal treasures behind. There was no time to grab jewelry, clothes, photo albums, or even their money.

"We have only these clothes," Sarah Fazili said, pointing to the outfit she was wearing.

Her cousin, A. Seyar Fazili, was a TV broadcaster and the proud owner of a luxury, Japanese car with more than 500 horsepower.

That car is now just a memory. He left it abandoned in front of his former home, 7,500 miles away.

"Yes, I miss it," he said, staring at a photo of him leaning against his beloved vehicle. 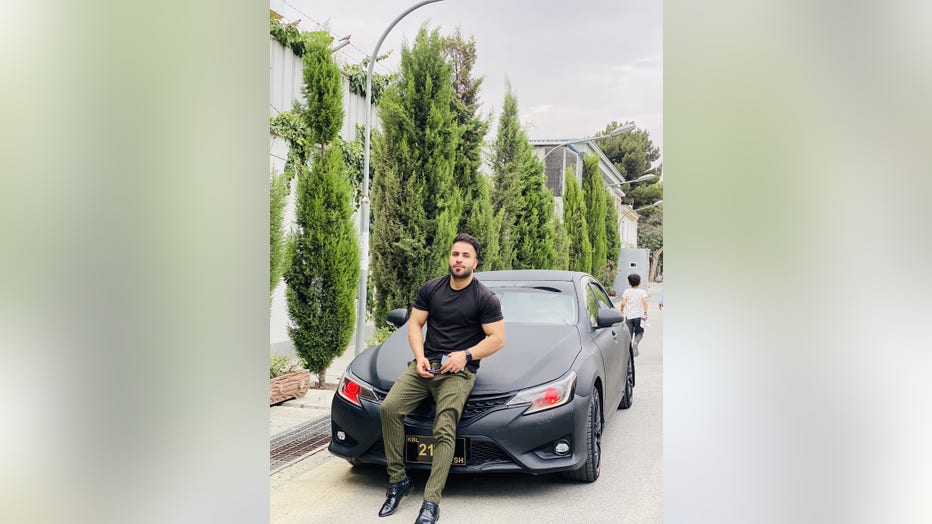 A. Seyar Fazili stands in front of his luxury, Japanese car in Kabul. He had to leave everything behind when he fled from the Taliban in August 2021.

Scorpions at the military base

But the family does not miss their nearly two-month stay at the Texas military base where they lived until their paperwork was ready to come to California.

They described conditions at Fort Bliss, where they said scorpions climbed up poles in their tents and crawled over them as they slept. They said the military cots were too uncomfortable to sleep on. They said they ate the same meatball dish with soggy bread for 40 consecutive days.

"It was so bad," Sarah Fazili said.

It wasn't all bad, though.

Her brother, Ahmad Seyar Wahidy said the soldiers at the base were very nice, calling them "guests" and not refugees.

He said the other immigrants would play volleyball together and the rest of the time they mostly spent searching for information on their phones.

In an interview with KTVU, Congressman Ro Khanna who represents the Bay Area – the largest Afghan diaspora – said his office has been working on several cases, helping to bring refugees to the United States.

In terms of the military bases serving as processing centers, Khanna said it's important to show the fleeing Afghans the proper dignity they deserve.

He said he is working with the military and the State Department to provide better sanitation and counseling services as these families suffered severe trauma during their escape.

He noted that overall, though, this was a "historic airlift," evacuating nearly 130,000 Afghans out of their homeland once the Taliban took over.

At least 65,000 of those people are stationed at military bases across the United States. Other refugees are now living across the globe, on bases in Belgium and beyond.

As for the evacuation effort, Khanna said "there needs to be improvements but given how many people and Herculean nature" of the airlift, he gave President Joe Biden a certain amount of credit. 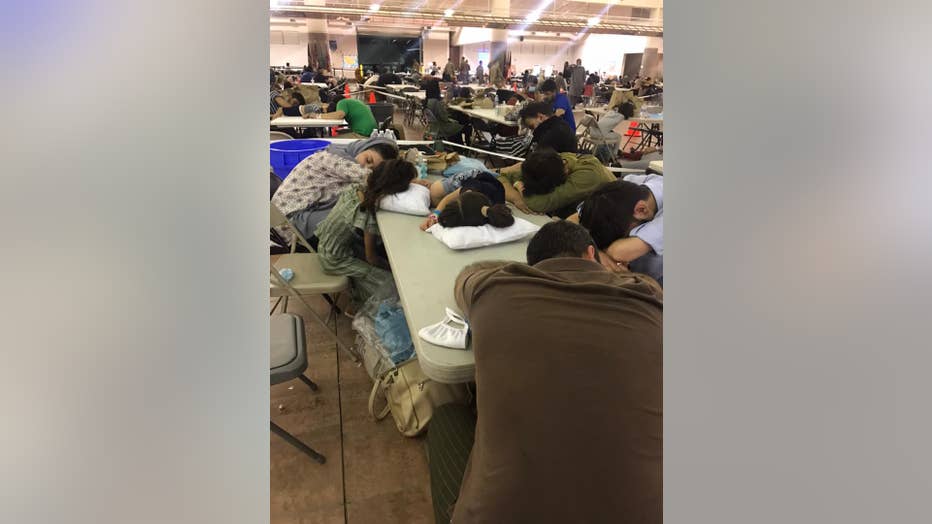 The Fazili and Amin families sleep on tables at Fort Bliss, Texas after fleeing the Taliban. September 2021. Courtesy: Fazili family

Looking for work and a place to live

The Fazili family is now being helped by the Afghan Coalition in Fremont, which has for years helped refugees resettle in California.

Executive Director Rona Popal said her agency is now assisting about 15 or 20 families who fled from the Taliban this summer.

She helps connect them with immigration attorneys and career specialists as they need to get green cards, humanitarian parole status, asylum and ultimately, citizenship. She also points them to get educated at school and perfect their English.

Siddiqui said that finding Afghan refugees' homes is especially difficult because of the high housing prices in the Bay Area.

And at least for now, none of the Fazili family members have found jobs or even have legal status to work.

Still, the family is hopeful they will soon be able to make their way in California.

Mina Amin, 56, who worked as a teacher, secretly educating young girls, said that now she is here, her anxiety level is much lower because she is not "constantly hearing bombs and shooting."

She and her family want desperately to get their paperwork in order so that they can begin their lives again.

There is no other choice.

"We hope we can have a good life and will find work and can be educated," Sarah Fazili said. "Because we can't go back to Afghanistan if the Taliban is there. They will kill us." 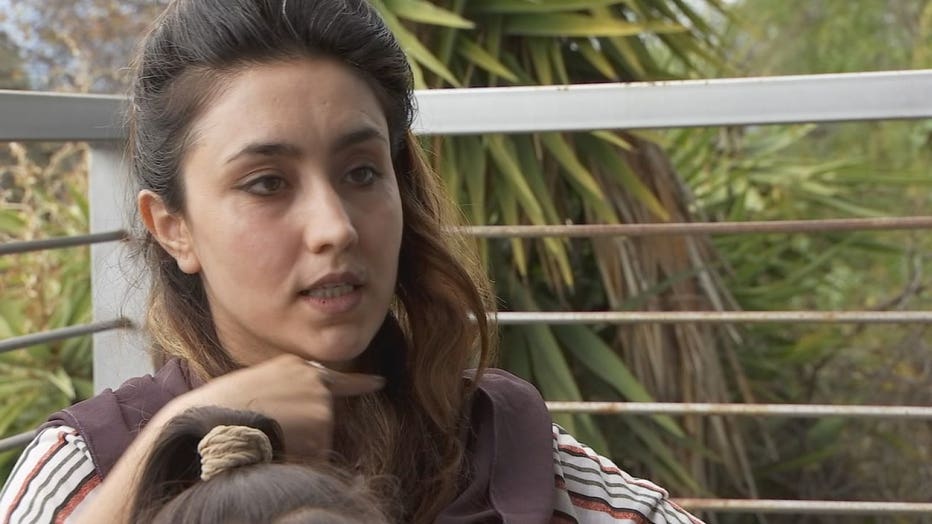 Sarah Fazili slices her neck with her finger, showing how the Taliban would kill her if she returned to Afghanistan. 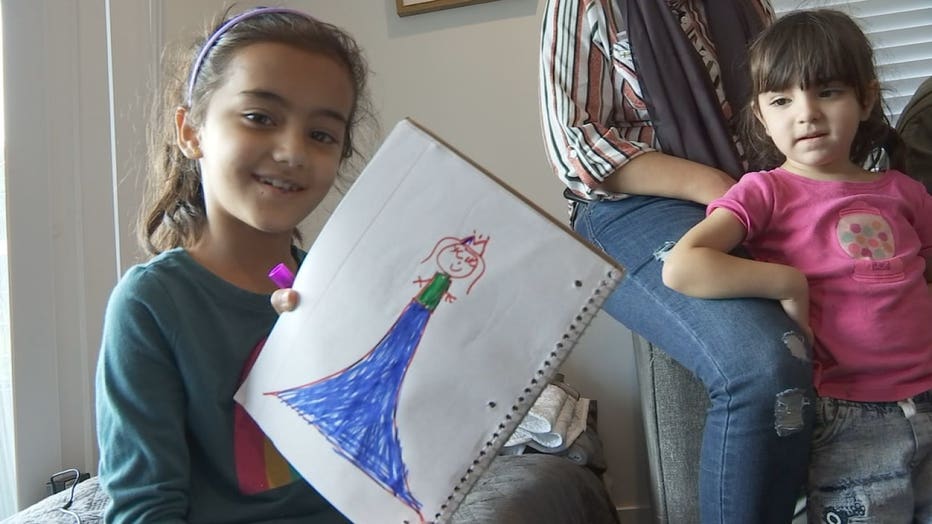 Rahil Fazili, 7, draws a picture in her new home in Hayward. 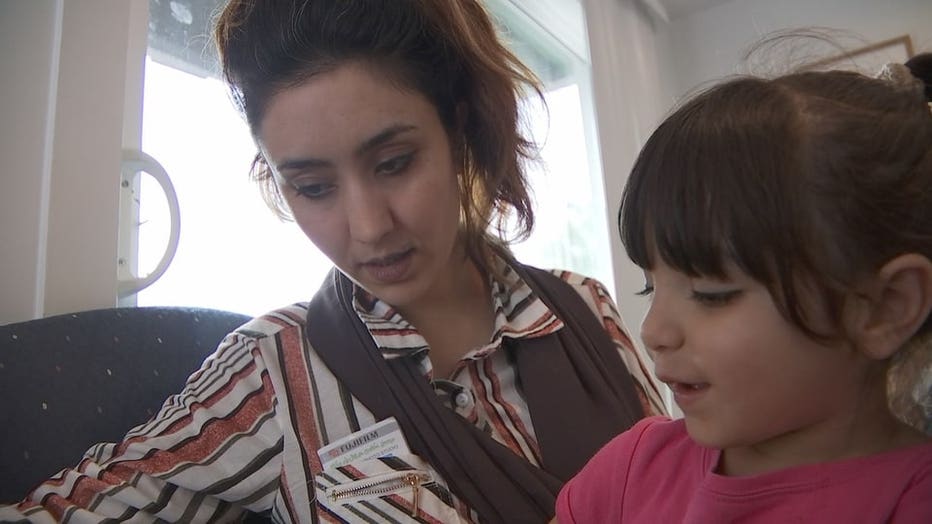 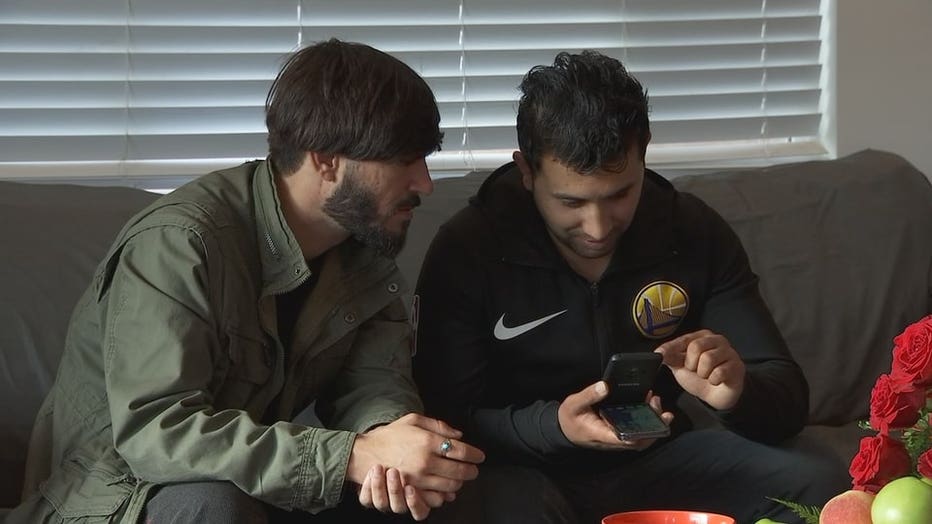 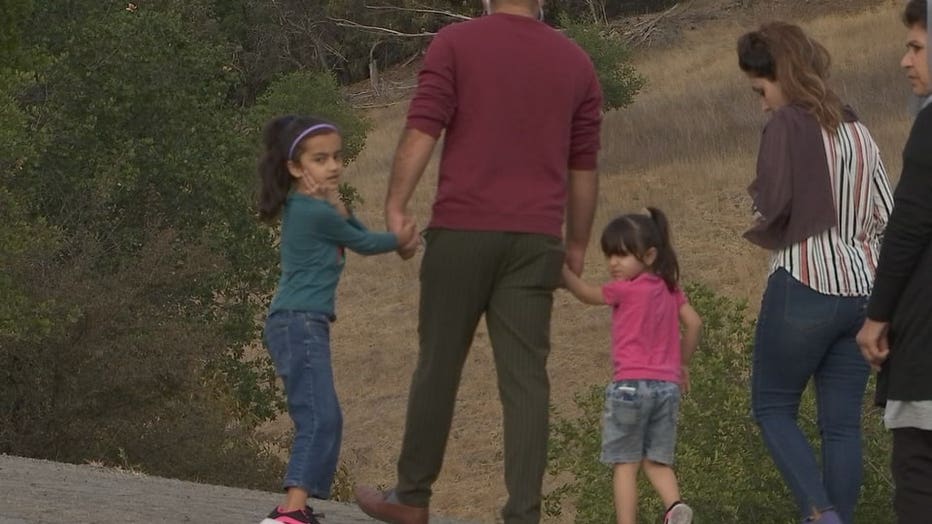 Parents Ajmal and Sarah Fazili, take a walk with their daughters in Hayward. Oct. 21, 2021 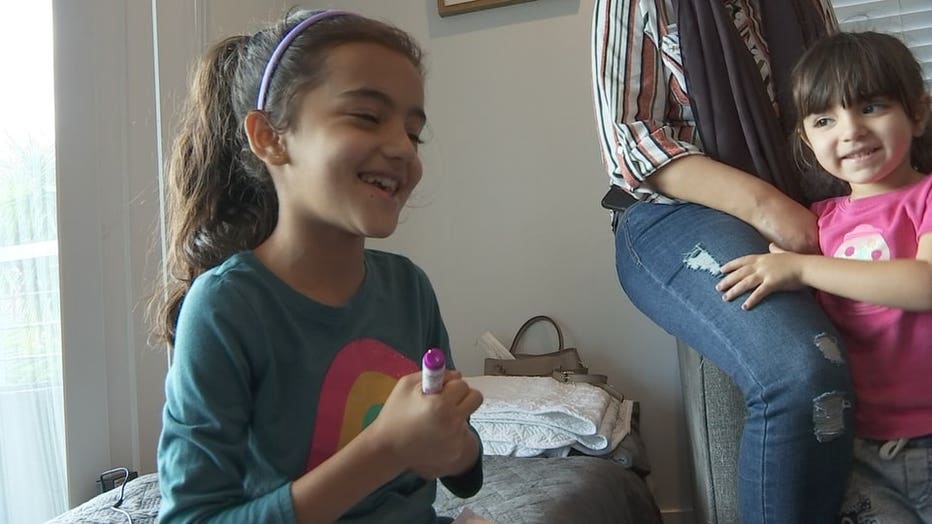 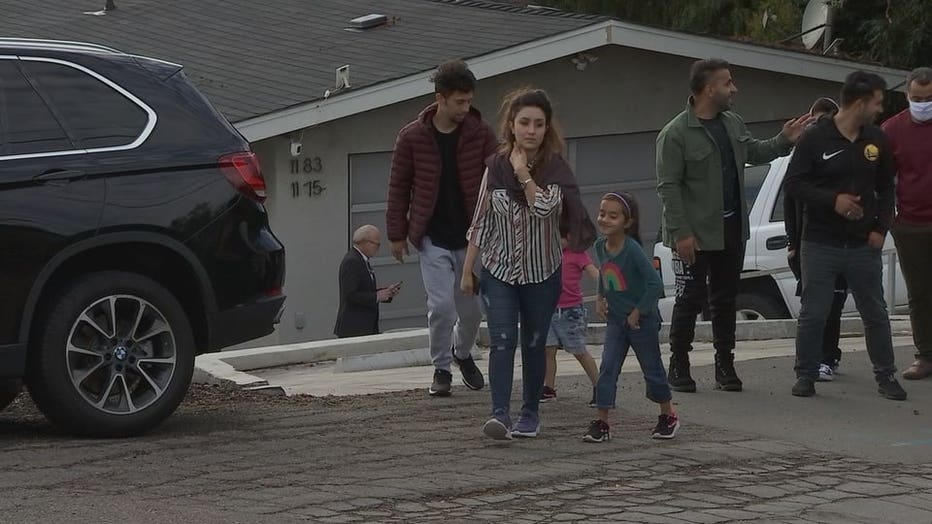 The Fazili family takes a walk from their home in Hayward. AirBnb has let refugees stay for free for a month. Oct. 21, 2021 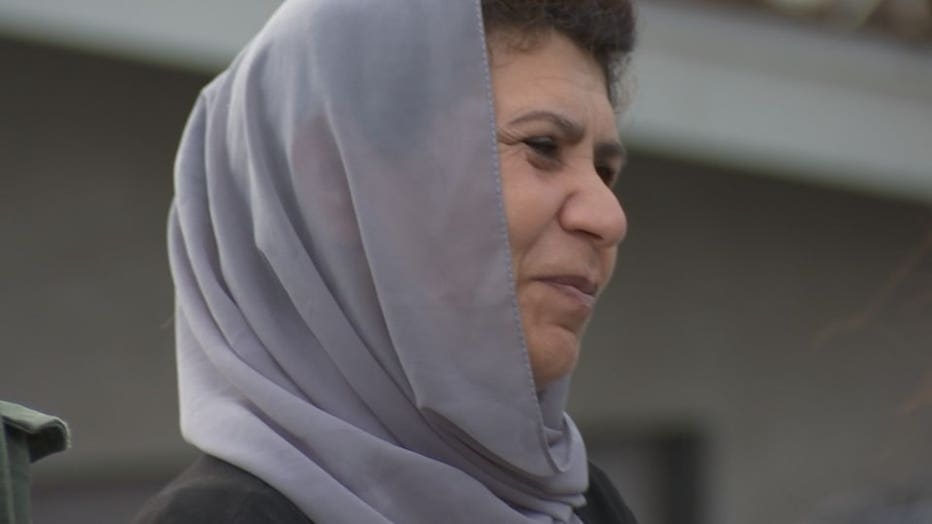 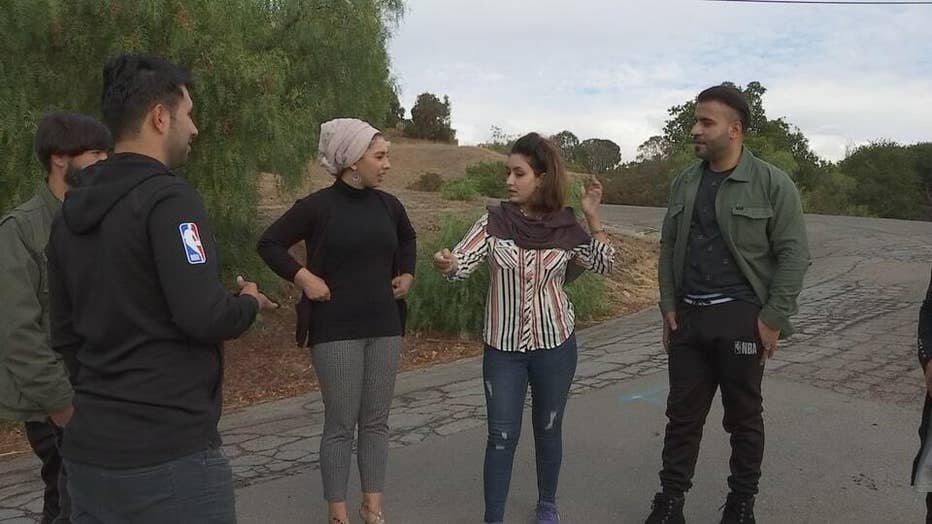 The Fazili family fled Afghanistan in August and has now relocated to Hayward. Oct. 21, 2021 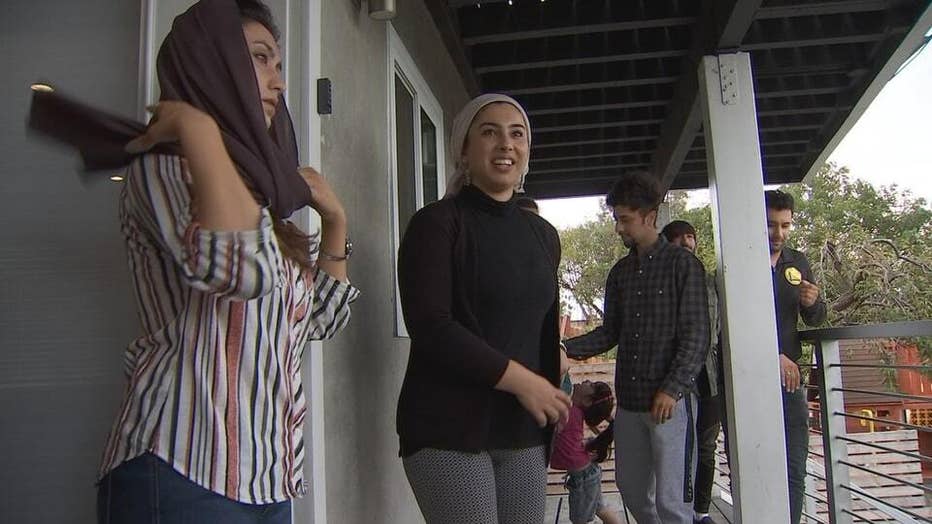 Sarah Fazili, a female radio journalist in Afghanistan, stands with Madeena Siddiqui, a volunteer with the Afghan Coalition in Fremont, after the Fazili family fled the Taliban. They are now staying in Hayward at an AirBnB provided free for one month 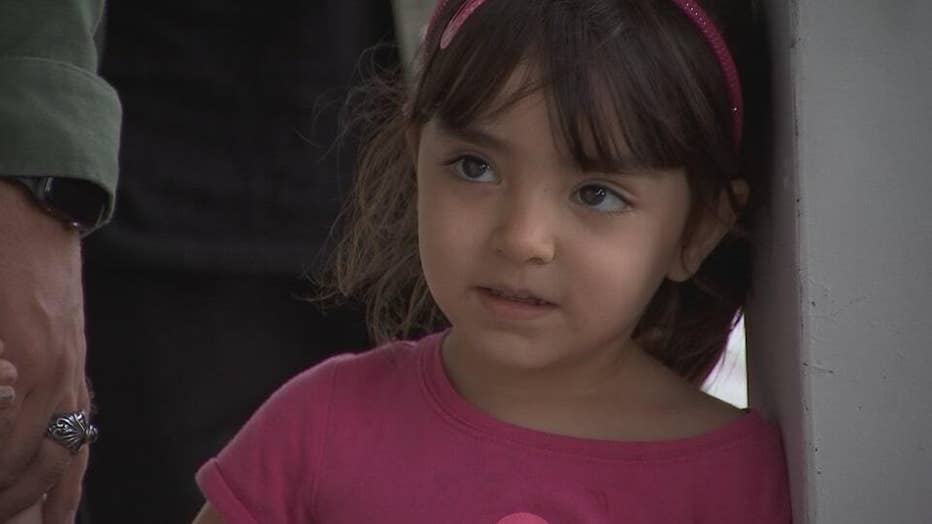 The Fazili family fled the Taliban and are now staying in Hayward at an AirBnB provided free for one month. Manahel is 3 years old. Photo: Tony Hodrick Oct. 22, 2021