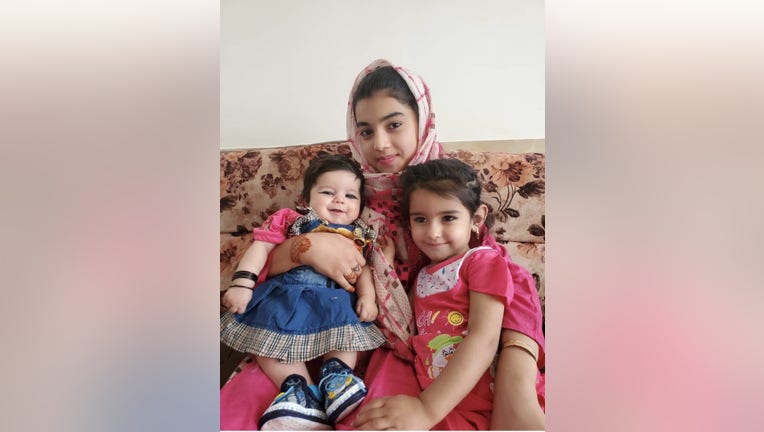 Reza's daughters also want to escape Afghanistan because of the Taliban takeover.

SUNNYVALE, Calif. - An Afghan translator who became close friends with a former Army captain from Sunnyvale and his relatives have made it safely to Belgium.

Reza, who asked that his last name not be identified for safety reasons, his three young girls, wife and mother fled Afghanistan on Thursday, hours before the suicide attacks on the Hamid Karzai International Airport. His sister made it to Qatar earlier in the week.

The death toll in that airport bombing has risen to 13 U.S. service members and at least 169 Afghans, which includes the cousin of a San Leandro Afghan refugee.

President Joe Biden blamed the attack on Afghanistan's offshoot of the Islamic State group, an enemy of both the Taliban and the West.

And as they left the mayhem and and their homeland behind them, Reza and relatives were able to lift off and finally touch down in Brussels late Thursday night.

"I haven't been able to sleep or eat," Farzana told KTVU on Friday. "Now I can breathe."

Farzana said her brother and his family are now quarantining for two weeks at a motel in Brussels, where everything is paid for and clean.

A former Army officer and a California sister are working tirelessly in the hopes of getting seven relatives who have worked for the U.S. government and human rights organizations out of Afghanistan.

They fled their home in Kandahar, however, with only their passports. Her mother left with only one dress, which has gotten quite dirty with all the travel.

"I told her to just wash it," Farzana said.

Farzana, who had helped build a girl's school in Afghanistan and is a human rights activist, had worried about her brother and other relatives. Her brother had worked for the school too, as well as for the United States and United Nations and could easily have been a target of retribution for the Taliban.

He and his family all had the proper visas and tickets to leave Afghanistan but couldn't fly out from the airpot because of the chaos and gunfire.

Their family had reached out for help to Patrick Hane of Sunnyvale, a former Army captain who they used to work with when he was deployed in Afghanistan.

Hane has known Reza and Farzana for years; Farzana's husband was also a translator of his during his Army days.

Hane helped make their story public and was trying to get help behind the scenes from Congressman Ro Khanna.

Hane, who is now an EMT, is thrilled his friends made it out of Afghanistan but worries about the new government being formed there, one with a history of actively discriminating against and harming women.

"Anyhow, we have to embrace our small victories, and Reza getting out with his family counts," Hane said. "I'll take what we can get at this point."

As for what's next, Farzana said she has no idea.

Her brother will need a job and money as he left all of his belongings back home.

She thinks her brother might be headed to Pennsylvania next. She doesn't know if and when they'll make it out to California in the future.

"Nobody knows what's going on," she said.