KTVU's Jamez Torrez reports on the efforts to clean up and make repairs to business storefronts following a night of destructive protests in downtown Oakland.

The protesters then began marching through downtown streets, heading east along Broadway and Telegraph Avenue.

Windows were smashed at the Target store on Broadway, and a new car was set ablaze at a Honda dealership on Broadway after a showroom window was shattered and protesters set the vehicle on fire.

Watson said that protesters also dragged barriers into the roadway to block and delay Oakland police officers from responding.

During the march, demonstrators threw bottles and other objects at the officers, Watson added. One officer was struck in the head with a bottle, sustaining injury. 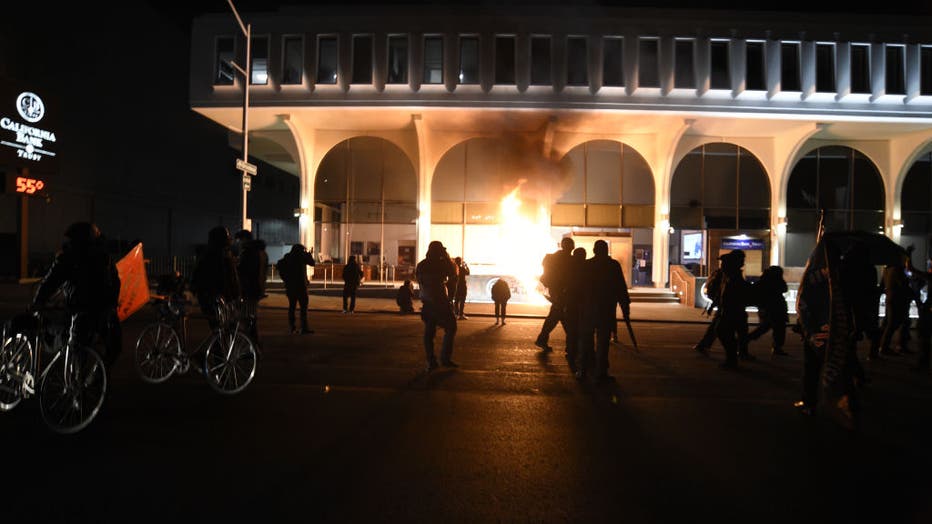 OAKLAND, CA,USA - APRIL 17: Hundreds of protestors took to the streets of Oakland Friday night in reaction to the killing of Daunte Wright and Adam Toledo, on April 17, 2021. Police eventually issued an unlawful assembly order at 9:30 P.M. and the pr

The demonstration ended at about 11:00 PM.

There were no other injuries reported, and there were no arrests nor any citations issued.