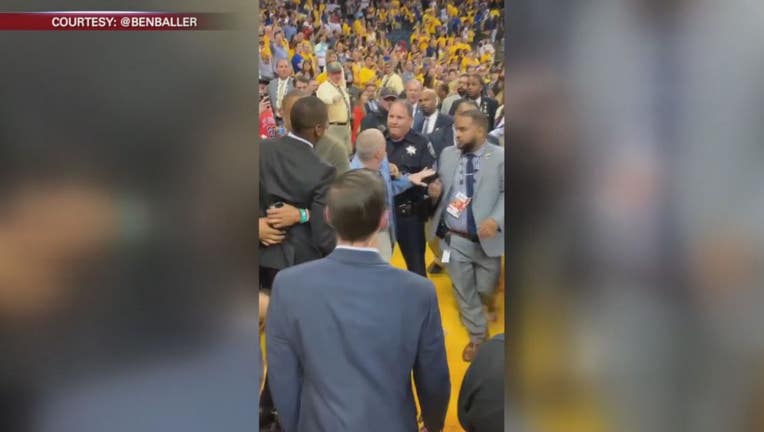 An Alameda Co. sheriff's deputy is suing Toronto Raptors President of Basketball operations for an incident during the 2019 NBA playoffs in Oakland.

SAN FRANCISCO - An Alameda County sheriff's deputy has sued Toronto Raptors President of Basketball Operations Masai Ujiri for allegedly hitting him in the face and chest at Oracle Arena in Oakland in June shortly after the Raptors won the NBA championship.

The lawsuit was filed in federal court in San Francisco on Friday by Alan Strickland and his wife, Kelly Strickland. It also names the Raptors; the teams' parent company, Maple Leaf Sports and Entertainment; and the NBA as defendants, claiming they knew or should have known Ujiri had "a violent predisposition and propensity for physical violence" but failed to prevent the alleged attack.

A Raptors spokeswoman said in a statement, "We are disappointed but not at all surprised Mr. Strickland has elected to take this path. His claims are baseless and entirely without merit."

The incident occurred on June 13, just after the Raptors beat the Golden State Warriors in Game 6 of the finals to win the championship.

The lawsuit alleges Strickland suffered physical and emotional injury. It asks for financial compensation for medical expenses and loss of earnings as well as a punitive damages award.

The lawsuit says Strickland tried to stop Ujiri, whom he did not know at the time, when Ujiri tried to cross the basketball court perimeter without showing security personnel, including Strickland, his credentials.

Ujiri allegedly then "hit him in the face and chest with both fists," sending Strickland backwards several feet, the lawsuit says.

The legal claims in the lawsuit include assault, battery, emotional distress and negligence.

In October, the District Attorney's Office announced that Ujiri would not be criminally charged.

The agency said a meeting among prosecutors, Ujiri and his lawyers "focused on matters that we believe merited constructive, structured mediation and conflict resolution and were better handled in a setting outside of the courtroom."