SACRAMENTO, Calif. - California is poised to take another halting step toward normalcy with Gov. Gavin Newsom expected to announce plans for reopening businesses that were shuttered in July amid soaring coronavirus cases and hospitalizations.

In the Bay Area, some changes were already taking place on Friday. Among other new rules, Alameda County hair and nail salons and other service businesses were allowed to open outdoors while Contra Costa County was letting gyms move workout facilities outdoors for members.

In anticipation of the Democratic governor’s announcement Friday, there was a common refrain from businesses and local governments buffeted by the outbreak: We need clarity.

Counties need to understand clearly “what thresholds to aim for and the public health data that will determine success or failure,” the California State Association of Counties said in a statement.

RELATED: Guide to COVID-19 rules in each Bay Area county

Newsom's comments will come as some health restrictions begin to ease in Alameda and Contra Costa counties on Friday.

A lot of these openings include personal care businesses that usually operate mostly indoors but will now have to take business outside.

In Alameda County, hair and nail salons can open outdoors only. The same goes for barbershops, skin care, waxing services, and massage parlors. Outdoor pools can ope with limited capacity and reservations.

Wineries can have outdoor tastings without having to serve food.

Social distancing guidelines must be followed.

The Darcie Kent Vineyards in Livermore will open Labor Day weekend for members and then later to the general public.

"This is a big step, definitely for us," said Amanda Tonkin.  "It is something we haven't been able to do or entertain since March."

In Contra Costa County, gyms can operate outside. Hotels can open to the general public. Until now, hotels were for essential business only. 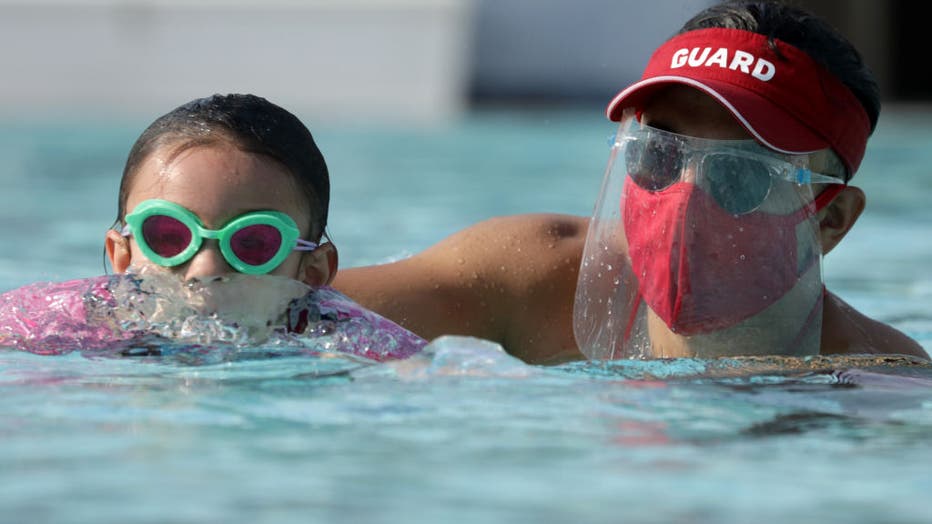 Meanwhile, Riverside County Supervisor Karen Spiegel, who has recovered from a bout with the virus, said she hopes the state plan recognizes different levels of risk that come with different business activities. She’s puzzled why shoppers can fill a Costco, where she stopped Thursday, while indoor hair salons remain off-limits.

Using metrics, the state needs to change how businesses are categorized, Spiegel said. “We have to do more of a risk-based approach.”

California has the most confirmed virus cases in the nation, with nearly 700,000, and the third-most deaths — 12,550. But since the closures last month, the average number of daily cases has been falling along with the infection rate and hospitalizations, which peaked at 7,170 on July 21 and since dropped to about 4,300.

Most of California’s 58 counties, including the most populous — Los Angeles — and most counties in the Bay Area remain on a state monitoring list because they are above one or more of the benchmarks for cases, infection rates and hospitalizations. Inclusion on the list restricts what businesses can operate, whether schools can offer classroom instruction and limits other activities, such as attending indoor religious services.

But as the state’s coronavirus data has improved in recent weeks, some counties have gotten off the list, including San Diego and Orange, the second- and third-largest counties by population.

San Diego Mayor Kevin Faulconer joined Spiegel in expressing frustration with the changing guidelines. There have been widespread complaints that even when counties hit data benchmarks that would allow them to reopen, the state has no clear rules to do so.

“The confusion keeps growing over California’s constantly shifting coronavirus lockdown rules,” Faulconer tweeted. The Republican, who is seen as a potential challenger to Newsom in 2022, wrote that the county had been dropped from the monitoring list as a result of falling case numbers and other favorable metrics but “we’re still waiting for answers.”

Back in July, as cases and hospitalizations climbed, Newsom changed course and again ordered sweeping closures, including shuttering bars and indoor restaurant dining statewide. For those on the watch list, inside religious services and indoor businesses including gyms, malls and hair and nail salons were also ordered off-limits.

The order was part of a state strategy to control the spread by focusing on limiting indoor activities, reflecting public health officials’ understanding of how the virus spreads.

Counties can open schools for classroom learning if they are off the watch list for 14 days, but it’s not clear what the timeline will be for reopening businesses.

It was also possible Newsom could outline reopening rules for places of worship, which have been pressuring the governor for more flexibility to open their doors. His previous shutdown order had an exemption for outdoor religious services.

On another front, the governor is facing legal challenges to set aside state orders that prevented schools from offering traditional classroom instruction.

“We would love to see the governor make an announcement that he is reopening schools to in-person attendance all across California,” said attorney Robert Tyler, whose firm has filed petitions with the California Supreme Court seeking to reopen classrooms on behalf of the Orange County Board of Education and other public and private schools.

Inevitably, Newsom’s announcement will also have political implications. With the election approaching, Republicans have been seizing on the long-running virus restrictions that have recast daily life for many to criticize his leadership.

KTVU's Rob Roth and Elissa Harrington contributed to this report.