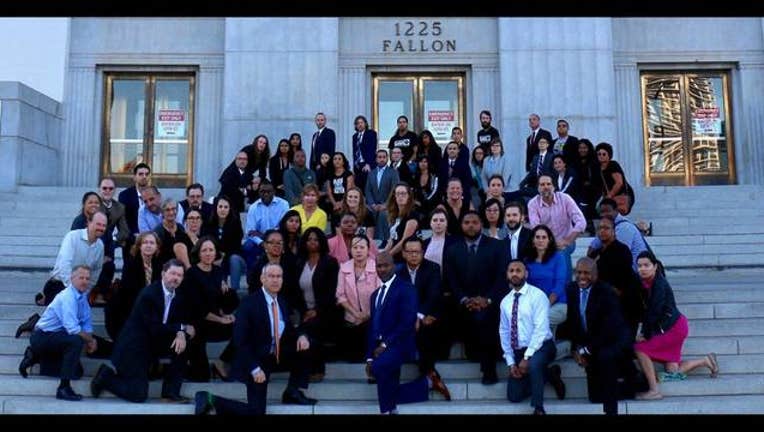 OAKLAND, Calif. - The entire office of the Alameda County Public Defender’s Office took a knee this week on the steps of the Oakland courthouse in what could be the first action of its kind in the United States.

At least 60 men and women from the office knelt in the photo.

“People don't realize what's really going on in this country,” Public Defender Brendon Woods wrote in a Thursday Facebook post quoting former 49er  Colin Kaepernick. “There are a lot of things that are going on that are unjust. People aren't being held accountable for. And that's something that needs to change. That's something that this country stands for - freedom, liberty and justice for all. And it's not happening for all right now.”

Woods credited Kaepernick, who has no job at this point, for inspiring the movement and criticized President Trump for encouraging police brutality and calling neo-Nazis as “very fine people” and peaceful black athlete protesters as “sons of bitches,” he wrote in his post.  He also added that he has the utmost respect for the military, but respects everyone’s right to participate in civil disobedience.

“Through his words and his actions, Kaepernick is advocating for two simple principles: respect for human rights and the right to peacefully protest injustice,” Woods wrote. “As public defenders, we are in a unique position to comment on social injustice – we are so qualified to do so, that we cannot remain silent.

On a daily basis, we witness disparities in policing based on race, excessive force used by law enforcement against low income people of color, jails and prisons that are disproportionately overflowing with Black and Latino men, and increasing rates of incarceration of women of color. We see how the criminal “justice” system leads to mass incarceration supporting the prison industrial complex.

This is why we are taking a knee. Frankly, it would be irresponsible if we did not.”

Eddie Lewis, executive director of the National Association For Public Defense, told KTVU Friday in an email that he was not aware of any other public defender's office in the country "who has taken this specific action." He added that his organization, like Woods, is "absolutely committed to racial justice."