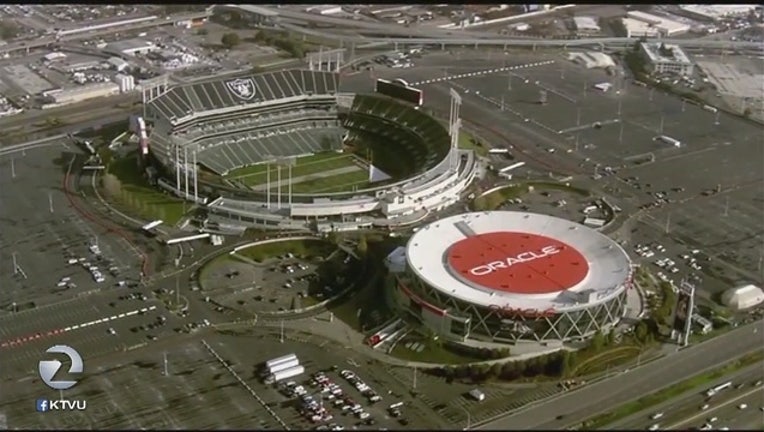 OAKLAND (BCN) The Alameda County Board of Supervisors said it has formally moved to negotiate the sale of its share of the Oakland Coliseum complex to the city of Oakland.

The county has discussed the possibility of selling its share of the site, which it has jointly owned with the city for more than 50 years, to the city for several years but its announcement late Tuesday is the first time the Board of Supervisors has officially said it wants to sell its share.

The board said in a statement that it is willing to sell its half "in the spirit of promoting successful new development and keeping the Oakland A's baseball team in Oakland."

The board said it finalized its decision to sell in the wake of the A's recent expressions of interest in buying the Coliseum property to build a new home stadium there.

The board said it "strongly believes that negotiating such a purchase and a plan for future development of the Coliseum properties would be simplified - and more likely successful - if the properties had a single owner."

The board said that since the city of Oakland ultimately controls land use related to the Coliseum property, it believes the best way to accomplish that is for the county to sell its ownership interest in the
Coliseum complex to the city.

The Board of Supervisors said that would enable the city to negotiate a single exclusive negotiating agreement with the A's for the Coliseum property.

Oakland Mayor Libby Schaaf and A's president Dave Kaval said two weeks ago that the city and the team are seeking to enter into exclusive negotiating agreements to explore both the Coliseum complex and the waterfront Howard Terminal as possible sites for a new baseball stadium.

Their announcement came only a few days after Kaval said the A's are offering to buy the Coliseum complex in exchange for paying more than $135 million in debt currently owed by the city and the county at the site.

The A's said last September that they wanted to build a new stadium near Laney College and Lake Merritt, but the Peralta Community College District's board eliminated that option in December when it advised the team it would no longer negotiate a sale of that site.

Laney College is part of the Peralta Community College District.

Since the college site was eliminated, the A's and the city have also looked at the possibility of building a stadium on the 60-acre Howard Terminal site northwest of Jack London Square.

The Board of Supervisors said all three teams have sought new home stadiums in recent years but even though the county and the city have been committed to keeping the teams in Oakland, "efforts to retain the teams have been complex due to the joint ownership of these properties."

The board said, "Alameda County officials will now begin talks with the city of Oakland to sell its share of the Raiders' Alameda properties and the Coliseum complex."

The board said it believes that the jointly-owned Coliseum properties will be made available for major development in the near future because of their prime location adjacent to Interstate Highway 880, BART and other transportation infrastructure.

The board said, "Negotiating the sale of the county's share will enhance the city's abilities to pursue its vision for substantial new development at the Coliseum site as expressed in its Coliseum Plan and
facilitate retention of the Oakland A's."