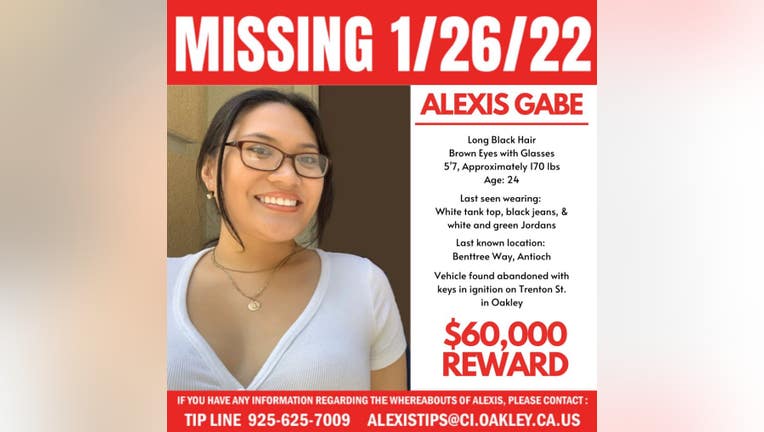 OAKLEY, Calif. - The reward for information leading to the location of an Oakley woman who went missing in January has increased to $60,000, officials said on Monday.

This is the latest development in the case of Alexis Gabe that has seen a flurry of activity over the past few days. Last week, police confirmed a cell-phone case found in Antioch was that of the missing 24-year-old woman's. It was considered a "key piece of evidence."

Family said she was last seen Jan. 26 and that she told them she was going to her ex-boyfriend's house in Anticoh, but never returned. Gabe's family found her car with the keys in the ignition, abandoned on a dead-end street in Oakley. Her family said Gabe had no connection to that street.

The boyfriend's Antioch home on Benttree Way was subject to at least two search warrants in February and more recently in May.

The $10,000 reward was originally posted back in April when police shared video of a possible person of interest connected to the case. Officials said an anonymous donor contributed $50,000 for information on her whereabouts.

"The Oakley Police Department and partner agencies are relentlessly working on this case and investigating the circumstances surrounding her disappearance. Our hope is that these reward funds will bring us closer to finding Alexis and bringing resolution to the Gabe family," said Oakley Police Chief Paul Beard. "We are grateful for the donor’s generous contribution and to the community for their continued support."

Those with information as to the whereabouts of Alexis Gabe are asked to call 925-625-7009 or Alexistips@ci.oakley.ca.us.