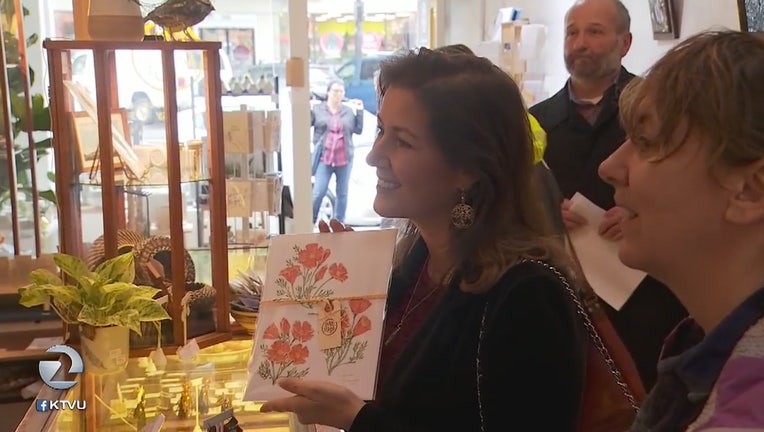 OAKLAND, Calif. - At the beginning of Oakland Mayor Libby Schaaf's State of the City address to the City Council Tuesday, she stopped to reflect on the immense loss residents have endured this year.

More than 100 people have died in violence, she said, noting too the toll COVID-19 has taken. About 380 Oakland residents have died of COVID-19, according to the Alameda County Public Health Department.

The mayor is required by the City Charter to provide a State of the City address to the City Council at its first meeting in October. Part of her address was presented as a 20-minute film she showed to the council and the public.

Before the film, Schaaf said that in a year of loss and struggle, it was important to document some successes, which the film did.

Even though the pandemic exacerbated the inequities present in the city, "Oaklanders would not accept the status quo," Schaaf said.

For one, trusted messengers delivered information about COVID-19 testing and vaccinations.

Also in the last year, Oakland launched Oakland Resilient Families, a privately funded guaranteed income pilot program that gives $500 a month to 600 families in the city. Schaaf is a founding member of Mayor's for a Guaranteed Income, which is advocating for an income floor for Americans.

"This is the type of security every family deserves," Schaaf said.

Also, the city and the Oakland Unified School District, among other groups, launched Oakland Undivided. That campaign provides school children with the necessary computers, technology, and internet connections needed to learn from home, which has been essential during the pandemic.

Schaaf said in 2021 the 1,000th family enrolled in a program called Brilliant Baby, which among other things, provides $500 to families to invest for their child's future.

Oakland also made inroads on its homelessness crisis, Schaaf said.

"We are moving people from homeless to housed," she said.

Tyrone Bryant expressed his satisfaction with his own home in a quiet Oakland neighborhood following homelessness.

"Housing is a right," Schaaf said, echoing what's become a famous statement by Moms 4 Housing, a group of homeless and marginally housed mothers in Oakland.

Founding members of Moms 4 Housing occupied a vacant West Oakland home owned by a development company to bring attention to the challenges working mothers face finding affordable and safe housing for their families.

She touted the record 30 miles of roadway the Department of Transportation paved last year. The department will pave 41 miles of Oakland roads this year, Schaaf said.

She also touted the Oakland A's proposal to build a new stadium at Howard Terminal, calling the would-be stadium "the most spectacular ballpark in the world."

Also, after the film, Vice Mayor Rebecca Kaplan and Councilmember Noel Gallo brought up concerns around blight and illegal dumping.

Kaplan suggested a surge of effort is needed by the city to address those problems. Gallo wants to see the city enforce its rules around those offenses.

Fife called the State of the City film a "commercial" about what Oakland can be. She said she thought it was "aspirational."

A caller during the public comment period after the meeting also called the mayor's video a commercial.

Schaaf is holding a public State of the City celebration Friday at 5 p.m. at Liberation Park at MacArthur Boulevard and 73rd Avenue. The event is free, but people must reserve a seat on eventbrite.