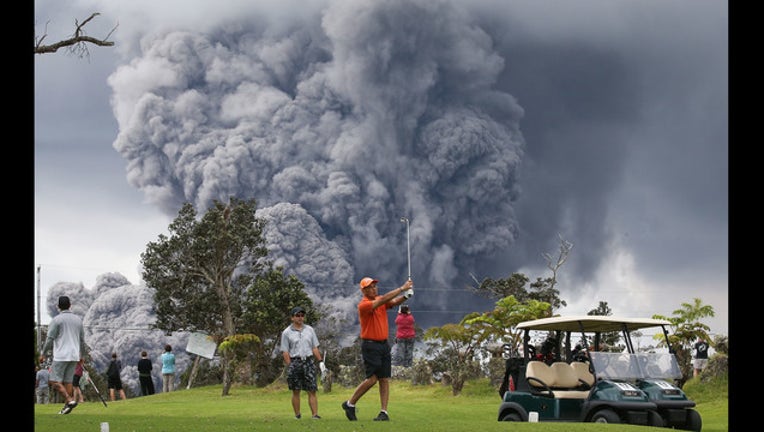 People play golf as an ash plume rises in the distance from the Kilauea volcano on Hawaii's Big Island on May 15, 2018 in Hawaii Volcanoes National Park, Hawaii. (Photo by Mario Tama/Getty Images)

The volcano spewed ash about 12,000 feet (3,657 meters) in the air Tuesday because of rocks falling into the summit, U.S. Geological Survey geophysicist Mike Poland said.

The plume is separate from the lava eruptions occurring about 25 miles (40 kilometers) away from summit, where about 20 lava fissures in the earth have destroyed more than two dozen homes and forced the evacuation of about 2,000 residents.

Geologists warn that Kilauea's summit could have a separate explosive steam eruption that would hurl huge rocks and ash miles into the sky, but it's not certain when or if that might actually happen.

Plume activity at the summit might not be as robust on Wednesday, Poland said.

"There is very little wind at the summit,' he said. "The plume, it's not near as ashy as it was yesterday, and it's rising more or less vertically over the summit region."

The fear over ash fall at the summit prompted USGS scientists to operate from a backup command center at the University of Hawaii at Hilo.

Poland didn't have an immediate height on the plume Wednesday morning since USGS scientists were not staffing the observatory at the summit. They will have to rely on remote observations, he said.

"Things seem to be progressing largely as they have been, except for a shift in wind and less ash," Poland said.

The ash-filled plume Tuesday prompted warnings to pilots to stay away. For those on the ground near active lava vents, similar health warnings were issued because of dangerous volcanic gases.

"Because there is the possibility that ash may be generated by this plume, the red aviation warning persists, and the warning level for ground-based hazards persists because of the eruptions that's ongoing in lower Puna," he said.

The Hawaii Fire Department said there is a high alert level for air quality near Lanipuna Gardens estates because of fissures. This area was evacuated shortly after the lava eruption began on May 3. Most fissures have opened up in this subdivision or the adjoining Leilani Estates.

Hawaii County officials said several fissures remained active Wednesday, producing lava spatter. However, lava from one fissure that had been clearing a path toward the ocean, about 2 miles (3 kilometers) away, hasn't advanced in the last 24 hours.