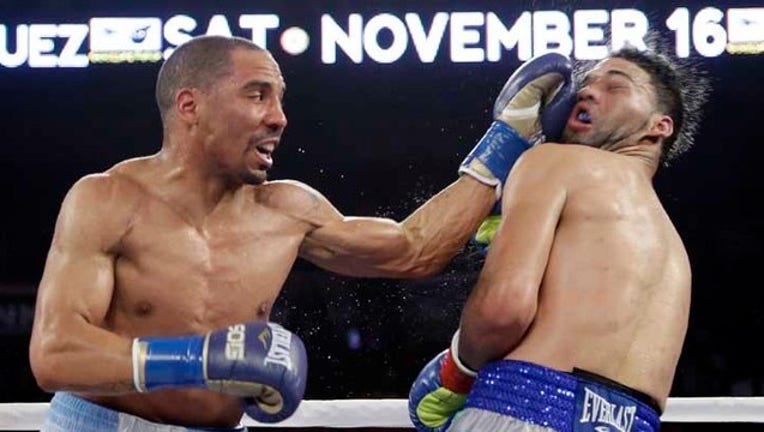 HAYWARD, Calif. (AP) -- Andre Ward is never one to shy away from a fight.

He just prefers the kind that takes place in the ring instead of a courtroom.

That's why Ward is so happy that his 19-month layoff will finally come to an end on Saturday night when he takes on England's Paul Smith in a non-title fight in his hometown of Oakland.

Ward (27-0) has not fought since winning a lopsided unanimous decision against Edwin Rodriguez to defend his WBA super middleweight title in November 2013. The absence from the ring stemmed from a legal dispute with his former promoter, Dan Goosen, who died in September 2014.

"I hate that I had to go through that. But at the same time, it did make me stronger," Ward said. "It did make me wiser as a business man. It made me appreciate my craft and my sport more. Unfortunately in our sport, those are things you sometimes have to go through. When you make a stance sometimes there are consequences. My consequence was not being in the ring and being off. I was willing to live with that. That being said I don't regret anything."

Not that it was easy.

Ward, the 2004 Olympic gold medalist, said he wrote several different retirement speeches during his layoff only to be talked out of giving them by his wife, his trainer Virgil Hunter and his pastor.

After Goosen's death, Ward reached an undisclosed settlement with the promoter's family and signed with Jay Z's Roc Nation Sports. Ward says he holds no ill will toward the Goosen family and is just happy to be preparing to go back into the ring.

The fight on Saturday will be just Ward's second since beating Carl Froch in December 2011 in the Super Six super middleweight tournament final. Ward also dealt with a shoulder injury that forced him to the sideline before the dispute with Goosen.

Ward, 31, said he knows he will have some rust when he gets back into the ring against Smith (35-5).

"Those are the cards I was dealt," he said. "It was something I had to go through. We got through it. By no means is that going to be any kind of excuse or crutch going into this fight. Win, lose or draw that's what it is. I'm more than confident and I feel good about this fight."

The fight will be the first in a new partnership with Roc Nation and BET. There will be nine two-hour telecasts over the next 18 months as part of this deal as Roc Nation gets into the boxing promoting business.

After the lengthy fight with Goosen, Ward said he was happy to join forces with someone like Jay Z, who understands the importance of the star because of his lengthy career in music.

Smith lost his last two fights by decision to Germany's Arthur Abraham for the WBO super middleweight belt. Smith was willing to fight Abraham in Germany just like he is fighting Ward in his hometown.

"He's going to bring it. I know that," Ward said. "That's why we picked him. He's tough. He's durable and he's going to come. He's going to be in shape. If I have any ring rust or something's off, he's the kind of guy who will bring it out. That's what's dangerous about these kinds of fights."