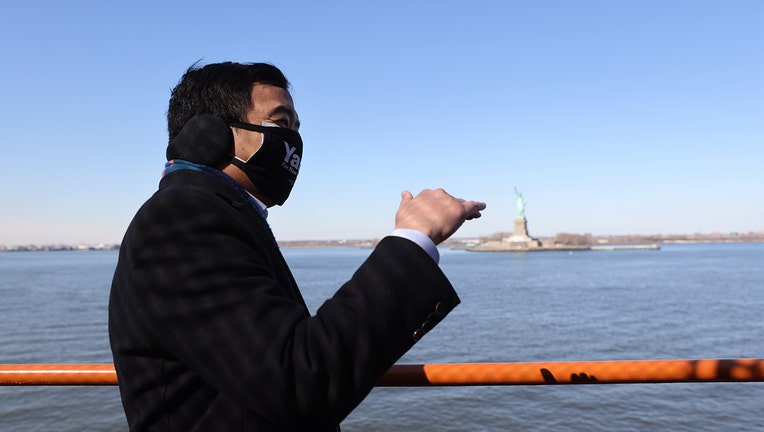 NEW YORK (AP) - A photographer who was shoved by a man who then came at him with a metal pole during a trip on the Staten Island ferry on Friday was able to get out of harm's way when New York City mayoral candidate Andrew Yang intervened.

Spencer Platt, a photographer with Getty Images, said he was on the top deck of the boat heading toward Staten Island around 11 a.m., talking on the phone after taking some photos of Yang, who was headed to campaign events.

Platt said when he turned around, the man was "just right in my face, like an inch away."

The man pushed him, sending him down onto a bench, and Platt said he saw he was carrying some kind of metal rod.

"He immediately lifts that up, comes at me and has it raised over me," he said.

The photographer got the attention of Yang and his campaign, who were inside, and he said they came out, with Yang in the lead.

"He came out ... and he just kind of yelled, the guy turned around, and that allowed me to just kind of bolt out of there," Platt said.

"I think most people would have the same impulse I had — to try and do anything that you can to protect somebody who might be threatened or endangered," Yang said in a statement. "I got up and tried to intervene as quickly as I could. I'm glad that when he turned he saw me and recognized me, and the situation deescalated quickly."

Platt told some New York Police Department officers who were on the boat and who then went to keep an eye on the man.

The NYPD said no arrest was made.