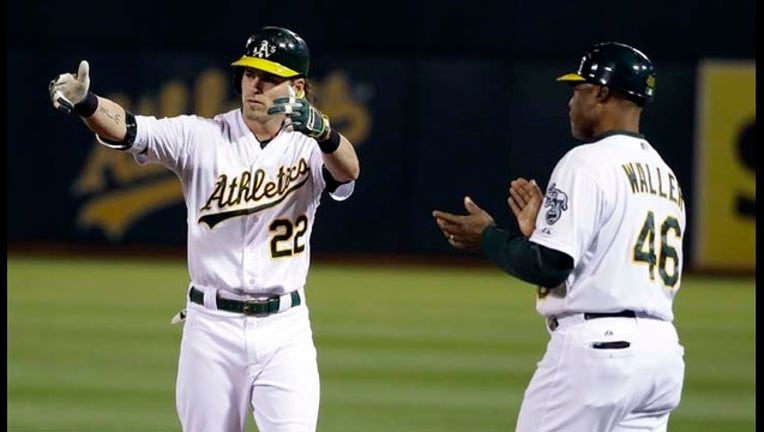 OAKLAND, Calif. (AP) — Mike Trout doesn't have many days where he goes without a hit. When he does, the Angels' slugger tends to bounce back in a hurry.

A day after going hitless with three strikeouts, Trout was back in form doing what he does best in a stadium that has quickly become his home away from home.

Trout homered and drove in three runs, Johnny Giavotella hit a tiebreaking single in the seventh inning and the Los Angeles Angels held on to beat the Oakland Athletics 6-3 on Wednesday night.

Trout hit his fifth home run with two outs in the third then doubled in two with the bases loaded in the seventh to help the Angels pull away and end a two-game losing skid.

Erick Aybar added a two-run single as Los Angeles matched its second-highest run in two weeks despite losing first baseman Albert Pujols to a leg injury in the sixth.

"He didn't really feel a pop. It was more a little bit crampish," Angels manager Mike Scioscia said. "We're definitely going to err on the side of caution. Right now we're optimistic that it's not going to be too long."

Fernando Salas (1-1) retired three batters for the win while Huston Street pitched the ninth for his eighth save in eight tries.

Marcus Semien had three hits and scored twice for Oakland. The A's have lost five of six.

Los Angeles had been held to three runs or fewer in seven of its previous 10 games before breaking out against Oakland.

Giavotella's one-out single off A's reliever Ryan Cook (0-1) put the Angels up 4-3. After Kole Calhoun walked to load the bases, Trout doubled to left to drive in C.J. Cron and Giavotella.

"That's what (Trout) does," Oakland manager Bob Melvin said. "We were in a bind with the bases loaded and nowhere to put him. That's why he's the MVP."

Trout extended the lead with his fifth home run of the season, a solo shot that landed halfway up the stands in left field. It was the 10th homer of Trout's career hit at the O.co Coliseum — the most by any visiting player since the Angels slugger made his big league debut in 2011.

Ike Davis doubled in Semien in the sixth and Josh Reddick followed with a single off reliever Cesar Ramos that tied the score at 3.