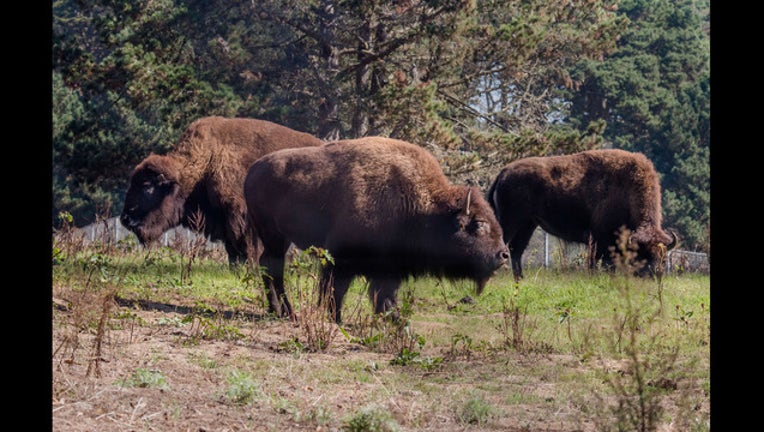 PHOTO: Adult bison shown in Golden Gate Park, note that the identifying eartag for Brunhilda is #34, and she may (or may not be) seen in this image. Credit photo by May Woon.

Two live web cameras in the bison paddock offer a unique look into the lives of the all-female herd, including the five long-time members: Baily, Betsy, Buttercup, Bambi and Bellatrix. Another five female 1-year-old bison have recently joined the herd; they were acquired in March as part of the celebration of the park's 150th anniversary.

The new Bison Cam can be found at www.goldengatepark150.com/bison.

The yearlings, the first new bison to arrive at the park in eight
years, were purchased with a $50,000 donation to

"The bison paddock is one of the favorite destinations in the
park, and now we can open this amazing experience up to animal lovers regardless of location," said Phil Ginsburg, general manager of the San Francisco Recreation and Park Department. "It's truly amazing to watch the beautiful youngsters interact with the established herd and enjoy their home in Golden Gate Park."

Zoo staff care for the bison, while recreation and park gardeners
maintain their enclosure.

Bison first arrived in Golden Gate Park in 1892, when they seemed to be endangered.

"Bison have been part of Golden Gate Park for more than a century and they help connect us to our storied past and represent our exciting future," San Francisco Parks Alliance CEO Drew Becher said. "We are always looking for more ways to connect the park with people and these webcams are an exciting way to engage visitors in an important part of our history."