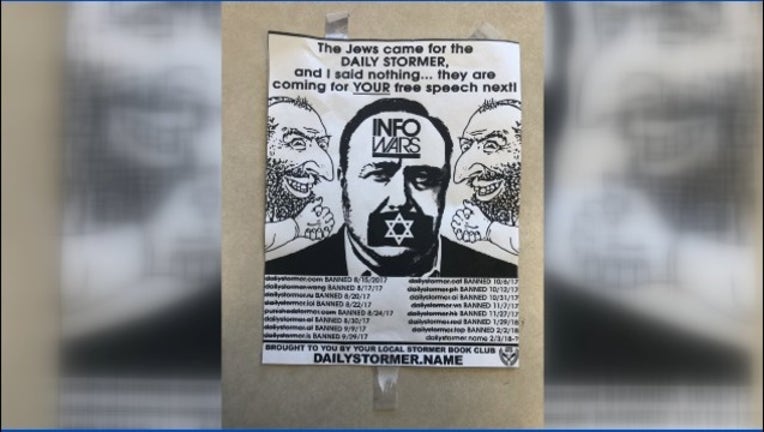 Anti-Semitic flyers have recently been found at East Bay synagogues.

One flier was found Saturday morning on the ground by a member at Temple Beth Sholom in San Leandro. In the center of the flier was the face of Info Wars owner Alex Jones with a Jewish star covering his mouth and two Jewish men laughing in the background.

The top reads: "The Jews came for the daily stormer,” and the bottom follows by saying "brought to you buy your local stormer book club,” which is a neo-Nazi website followed by white supremacists.

Five East Bay synagogues received the fliers. The anti-defamation league wouldn't name which ones, but issued a security alert and this statement.

"ADL is communicating with relevant law enforcement agencies and Secure Community Network about this situation, although it does not appear that any crime has been committed to this point,”

The San Leandro Police Department is holding a flier for examination and have promised to increase security. Temple Beth Shalom also issued a statement, saying in part.

“We are taking additional security measures to protect our congregants during the upcoming high holidays. These hate groups stand for the very opposite of our values of love and inclusivity. We are fortunate to have a warm and close-knit community that will not be cowed by attempts to intimidate.”

Right wing conspiracy theorist Alex Jones was permanently banned from twitter for abusive behavior. Apple, Google, Facebook and Spotify also restricted the reach of Jones and Info Wars for what they said was promoting hate speech.

Steve Glaser says he is thankful it wasn't worse.

"It might have been a hateful poster, but thank god there wasn't any psychical violence against people,” he said. “I guess we have a first amendment right to say nasty things.”