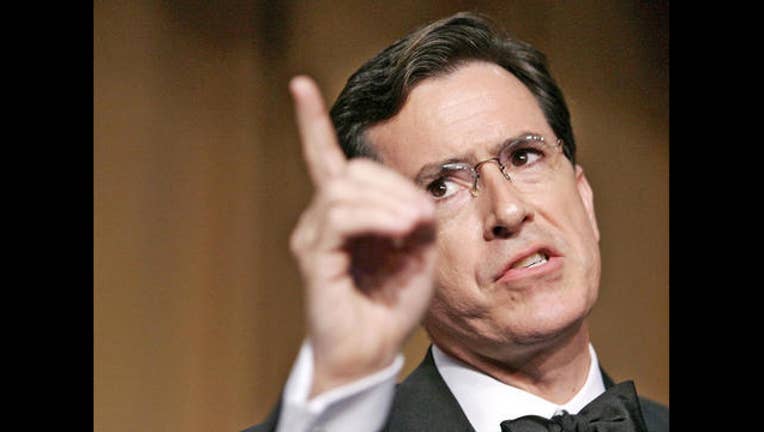 NEW YORK (AP) -- Stephen Colbert, whose crude reference to Donald Trump angered some of the president's supporters this week, has lobbed zingers at him at the blistering pace of 3.37 a day during the chief executive's first 100 days in office.

Trump is on pace to be the most joked-about president in late-night television in at least 25 years, the Center for Media and Public Affairs at George Mason University said Thursday.

Colbert, on his show Wednesday, discussed the fallout from a Trump joke two days earlier that prompted calls to fire him and boycott the CBS "Late Show" advertisers. He said he didn't regret insulting the president, but that "I would change a few words that were cruder than they needed to be." He made a reference to the male anatomy when he said of Trump Monday: "The only thing your mouth is good for is being Vladimir Putin's c--- holster."

Colbert said he was upset at Trump for insulting CBS "Face the Nation" host John Dickerson.

It was one of 337 Trump jokes that Colbert has made since the president's inauguration in January, the study said. Trevor Noah of Comedy Central's "The Daily Show" made 315 Trump jokes in the same period of time, NBC's Jimmy Fallon unleashed 231 and ABC's Jimmy Kimmel 177.

The Trump-battering has paid off handsomely for Colbert and CBS. The "Late Show" eclipsed Fallon's "Tonight" show in the ratings shortly after Trump's inauguration and has now won 13 weeks straight. Last week CBS averaged 2.74 million viewers to Fallon's 2.68 million, the Nielsen company said.

"The polarization of politics has migrated into the polarization of late-night humor," said Robert Lichter, the George Mason professor who directs the comedy content research. "People want to hear jokes about the politicians they don't like."

That in itself turns some conventional wisdom on its head: for years many late-night comics made it a point to be equal opportunity abusers for fear of turning off one side or another, he said.

Trump has been the target of some 1,060 late-night jokes since taking office, the study said. That puts him on pace to beat President Bill Clinton's record of 1,717 jokes in 1998, the year his affair with Monica Lewinsky was in the news, Lichter said.

Colbert, for his part, isn't taking any pity on the president.

"He, I believe, can take care of himself," Colbert said Wednesday. "I have jokes; he has the launch codes. So, it's a fair fight."