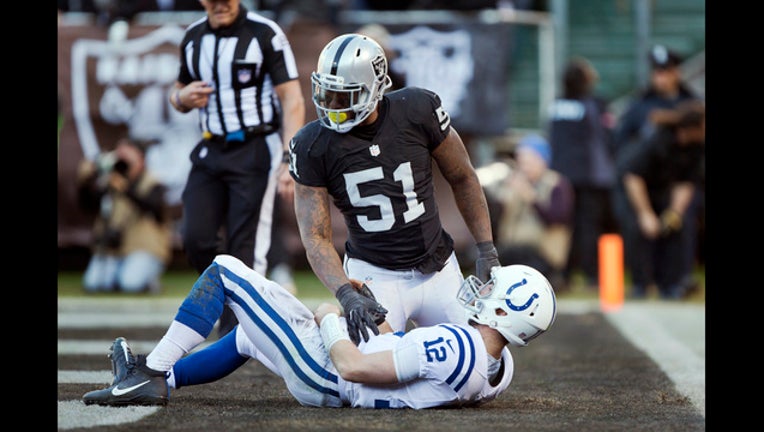 A person familiar with the decision said Saturday the move should be official next week. The person spoke on condition of anonymity because the team hadn't announced the transaction. The Athletic first reported the decision.

Irvin played just nine snaps in a 34-3 loss to the San Francisco 49ers on Thursday night. He will be subject to waivers and will be owed about $3.8 million for the rest of the season if he isn't claimed.

Oakland came into the year banking on Irvin and Khalil Mack to serve as bookend pass rushers anchoring the defense. Mack was traded a week before the season to Chicago for a package of draft picks following a lengthy contract holdout, and now Irvin is on his way out too.

The Raiders (1-7) rank last in the NFL with just seven sacks and have a league-worst 35 quarterback pressures, according to SportRadar. The next worst team is Tennessee with 59.

The 31-year-old Irvin has three of the sacks and five of the pressures but has had little impact on a defense that is on pace to be one of the worst ever. Irvin has just six tackles despite an $8 million salary.

Oakland is allowing 6.76 yards per play, the worst by any team through eight games since the 1970 merger. The Raiders have allowed the second-most points as a franchise through eight games (252), are tied for the second-fewest takeaways (six) and have the fewest sacks (seven). Oakland also has allowed opponents to have a 113.9 passer rating, a mark that only one team ever has been worse than over a full season.

Irvin played just 24 snaps in Week 8 against Indianapolis and then just nine against the 49ers. Irvin's six games with his fewest snap counts since joining the Raiders in 2016 have come this year. Irvin had one tackle, no sacks and no pressures his final three games.

Coach Jon Gruden attributed the lack of playing time to Irvin not being part of the base defense against the 49ers.

"We weren't in our nickel defense very much," Gruden said Friday. "Remember we're a 4-3 team, we're not a 3-4. So in the base defense, sometimes he doesn't fit the role that we need done. No disrespect to Bruce. He's an edge rusher. We haven't had a lead. We haven't had the opposition behind in the chains a lot. So his role has been reduced. I know he's frustrated. I'm frustrated. We'll try to solve that as soon as possible. He's a good player. He's a good player."

Irvin was on the field for just seven of the team's 23 snaps in nickel formation with his other two plays coming in goal-line defense.

Irvin had 15 sacks his first two seasons with the Raiders. Irvin's 11 forced fumbles since the start of the 2016 season are the most in the NFL in that span.

The Raiders have now cut two of the players picked as captain this season having already released linebacker Derrick Johnson last month.