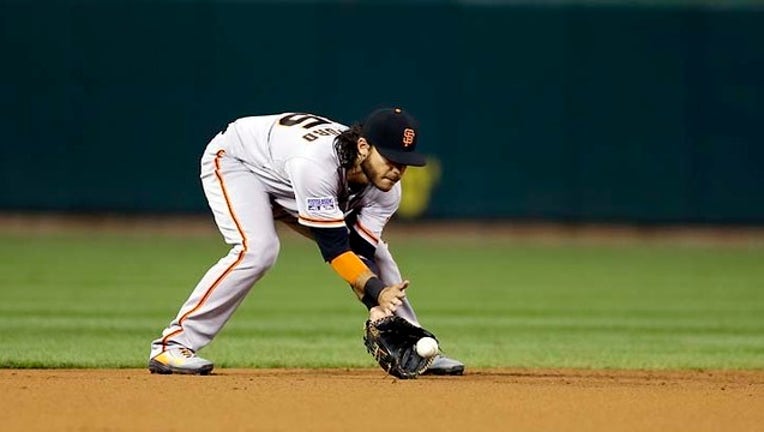 NEW YORK (AP) — Even before the first pitch of the 2015 season is thrown, an eye-popping baseball record will be set.

The average salary when opening-day rosters are finalized Sunday will break the $4 million barrier for the first time, according to a study of all major league contracts by The Associated Press. Dodgers pitcher Clayton Kershaw tops players at $31 million and Los Angeles projects to open the season with a payroll at about $270 million, easily a record.

Fueled by the largest two-year growth in more than a decade, the average salary projects to be about $4.25 million, according to the AP study, with the final figure depending on how many players are put on the disabled list before the first pitch is thrown. That is up from $3.95 million on the first day of last season and $3.65 million when 2013 began.

"MLB's revenues have grown in recent years, with the increase in national and local broadcast rights fees being a primary contributor," said Dan Halem, MLB's chief legal officer. "It is expected that player compensation will increase as club revenues increase."

Baseball's average was approximately $50,000 in 1976, the last year before free agency. Back then, many players took offseason jobs to pay their bills.

Now almost all of them do their heavy lifting in gyms, not warehouses.

In a $9 billion industry propelled by ballpark luxury suites and premium tickets, regional sports networks and streaming video, more than half the major leaguers are millionaires.

By comparison, the Consumer Price Index for Urban Wage Earners and Clerical Workers has risen slightly less than fourfold since the first class of free agents started negotiations in November 1976. And the average U.S. wage in 2013, the latest figure available, was $44,888, according to the Social Security Administration, up 1.28 percent from 2012.

"It isn't just the TV deals," union head Tony Clark wrote in an email to the AP. "From the parity on the field to the fan support & business off it (including the national TV contracts), the industry has never been healthier."

Last year, the Dodgers opened at $234 million and ended the New York Yankees' 15-year streak as baseball's biggest spenders. Still seeking their first World Series title since 1988, Los Angeles is No. 1 by a huge margin. The Yankees project to be second at about $215 million, followed by Boston at around $185 million.

Detroit is fourth at roughly $170 million — about $100 million less than the Dodgers. Coming off its third World Series title in five years, San Francisco is fifth, about $1 million behind the Tigers.

The low rollers are led by Miami (about $65 million), with Houston a few million dollars higher. The large-market Mets are right around $100 million, a mark they haven't reached since 2011.

"The industry is doing very well," Yankees outfielder Carlos Beltran said. "The owners are making a lot of money and the salaries for the players are going up."

Following Kershaw are Detroit pitcher Justin Verlander ($28 million), Dodgers pitcher Zack Greinke ($27 million) and injured Texas outfielder Josh Hamilton ($25.4 million). Hamilton has a lengthy history of drug and alcohol abuse, and has been suspended in the past.

The AP's figures include salaries and prorated shares of signing bonuses and other guaranteed income for players on active rosters, disabled lists and the restricted list. For some players, parts of deferred money are discounted to reflect current values.

Payroll numbers factor in adjustments for cash transactions in trades, signing bonuses that are the responsibility of the club agreeing to the contract, option buyouts, and termination pay for released players. San Diego is receiving $18 million from the Dodgers to cover most of Matt Kemp's salary, and the Marlins are getting about $12.68 million from Los Angeles as part of the seven-player trade than sent Dan Haren to Miami.