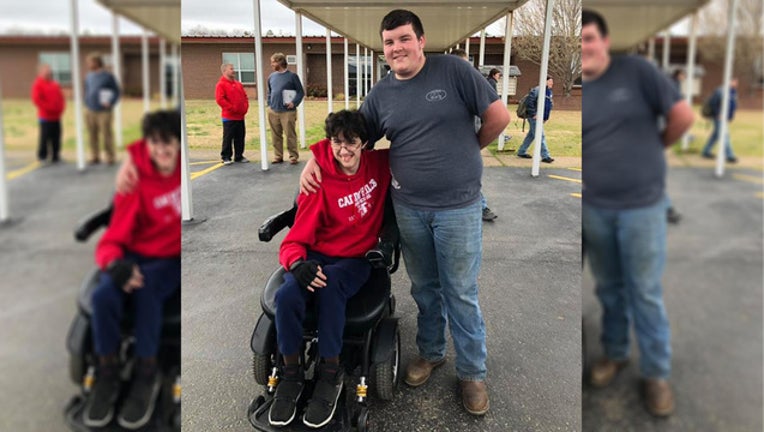 NORMAN, Ark. (FOX 11) - Navigating the hallways of high school is now easier for an Arkansas teenager after a fellow classmate saved for two years to buy him a motorized wheelchair.

Brandon Qualls, a senior at Caddo Hills High School in Norman, Arkansas, had been using a manual wheelchair to get around, according to KTHV-TV.

“My arms would get really tired and I would have to stop and take rests,” he told the Little Rock station.

The school district shared how fellow senior, Tanner Wilson, surprised Qualls with a new electric wheelchair in a post on Facebook.

“We are so grateful for the heartfelt surprise from one Indian to another,” the school district wrote in the post. “Tanner has been saving for two years to show his appreciation and friendship for Brandon.”

Wilson saved the money he earned at a part-time job and surprised Qualls last week with the new wheelchair during class, according to the local station.

“They came in and my face just blew up. I was crying everywhere. I was like ‘Wow, I can’t believe he did that for me,’” Qualls told KTHV-TV.

It’s a small gesture that will likely stay with Qualls beyond high school.

“I feel like life’s a little bit too short to be judging everybody, and you should think more of others than just yourself,” Wilson said.

After the touching story was widely shared online, the school district said it was “so thankful” for all the love and support it received, with some Facebook users offering donations to the students.

The district added that the students’ families elected not to begin any fundraising accounts for Qualls or Wilson "at this time."

"We are grateful for the coverage of this story and the impact of the generosity Tanner showed towards Brandon," the district said.