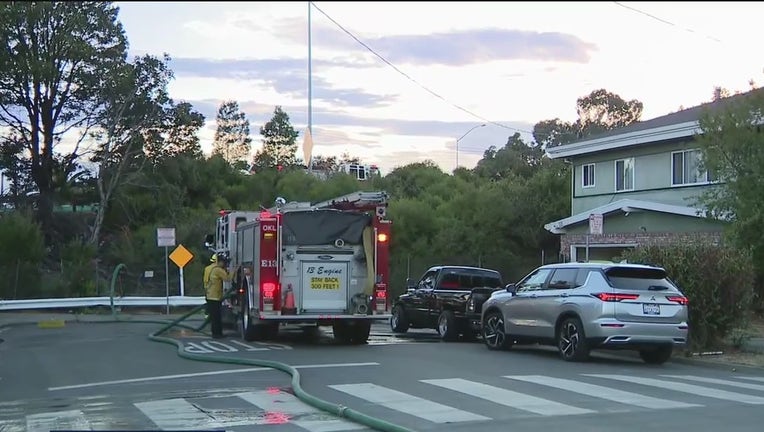 Oakland firefighters respond to brush fires along I-580.

OAKLAND, Calif. - Oakland firefighters responded to a two-alarm grassfire along Interstate 580 Tuesday evening, which they later said appear to have been intentionally set.

Firefighters said that's because flares were found at each location.

Oakland Fire Department Battalion Chief James Bowron said the fire department received the call of fire on the side of the road at 6 p.m. It turned out that it turned out that there were three separate brush fires burning between 35th and Coolidge avenues – near the same exit as a 4-alarm fire four days earlier.

Early on, some homes were said to be threatened, but firefighters later said that wasn't the case.

Bowron said there was no structural damage at all and that the only damage done was to vegetation. There were no evacuations.

The California Highway Patrol is working with the Oakland Fire Department to investigate this fire. They are looking at potential surveillance cameras for any suspicious people in the area and talking to neighbors to figure out how the fires started.

The fire on Tuesday was very close to another fire that broke out on Friday, which affected structures of several homes just a few exits away.

That fire remains under investigation and is considered a separate incident, fire officials said, adding that they weren't yet sure if an arsonist started that blaze, too.

Crews responding to grassfires off I-580 in Oakland

Oakland firefighters are responding to a two-alarm grassfire along Interstate-580 and Coolidge Avenue Tuesday evening. Officials posted about the incident on Twitter at around 6:15 p.m. According to officials, it appears to be four separate brush fires.