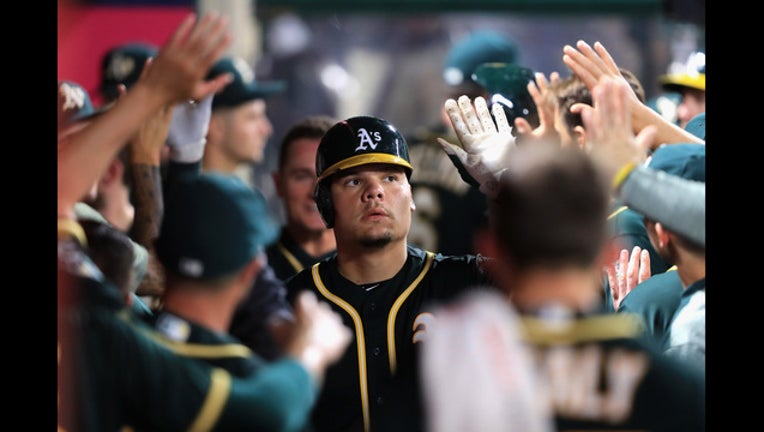 Oakland A's catcher Bruce Maxwell has pleaded guilty to disorderly conduct for an incident in Arizona last October in which he allegedly pointed a gun at a food delivery person, according to A's officials. (Photo by Sean M. Haffey/Getty Images)

OAKLAND, Calif. (BCN) - Oakland A's catcher Bruce Maxwell has pleaded guilty to disorderly conduct for an incident in Arizona last October in which he allegedly pointed a gun at a food delivery person, according to A's officials.

Maxwell, 27, was arrested at his home in Scottsdale, Arizona, last Oct. 28 after a woman who was delivering food to his house allegedly said that he pointed a gun at her, Scottsdale police said.

Maxwell will be sentenced on June 4 and under the terms of his plea agreement he will be required to complete a probation period as well as community service, the baseball team said.

"Accepting responsibility is the first step in working to make amends for my lapse in judgment," Maxwell said in a statement.

Maxwell said, "I am truly sorry for the pain that my actions have caused, and while they are not representative of who I am, I understand that I have to earn back the trust and respect of those around me."

A's general manager David Forst said, "I am pleased Bruce has taken responsibility for his actions. We expect our players to conduct themselves in a manner that reflects the standards of the Oakland Athletics. His conduct in this incident did not live up to that."

Forst said, "We have communicated with him throughout the legal process about our expectations as a representative of the organization. I believe he has already begun the work of making amends for his actions and look forward to his continued positive contributions to our community."

Earlier in 2017 Maxwell drew attention for becoming the first and only major league baseball player to kneel during the national anthem to protest perceived police brutality.