OAKLAND, Calif. - California has given the green light for more public schools to reopen in several Bay Area counties, an announcement that came after the state announced a drop in new COVID-19 cases.

That means more students may finally be able to set foot in a classroom, for the first time after nearly a year of distance learning.

Specifically, after Tuesday's announcement from the California Department of Health, there are now K-6 schools that would be allowed to reopen in the coming weeks in San Francisco, Alameda, San Mateo and Santa Clara counties. Marin and Napa counties have already been running in-person lessons.

However, just because a county is cleared for schools to resume in person, doesn't mean they will. Each school district has individual contracts with teachers, who must agree to return to school.

Many districts, such as Oakland, don't have such agreements. Neither does San Francisco, and the city attorney is planning to sue the school district on Wednesday over it.

But in Alameda, all school employees and students can start to be tested as of Wednesday for COVID-19 as the district works to reopen elementary schools under a hybrid model on March 8.

The majority of California's public school students have not been back for any in-person instruction since the pandemic began.

Under state guidelines, counties that had fewer than 25 new daily COVID infections for every 100,000 residents can now allow schools to reopen for part-time, in-person instruction if they haven't already.

Schools that reopened before the Bay Area's stay-at-home order in December were allowed to stay open for in-person instruction.

But schools that hadn't opened by December were blocked from doing so - until now.

Not all Bay Area public schools have been closed for most of the past year. In fact, 28 of Napa County's schools reopened already in the fall.

Most of Marin County's public elementary schools have been open since October - with no COVID outbreaks tied to those schools - even during the winter surge.

In fact, Marin County schools have been in session for 91 days with an average of 17,000 students. There have been zero transmissions of COVID from student to teacher, according to county data. 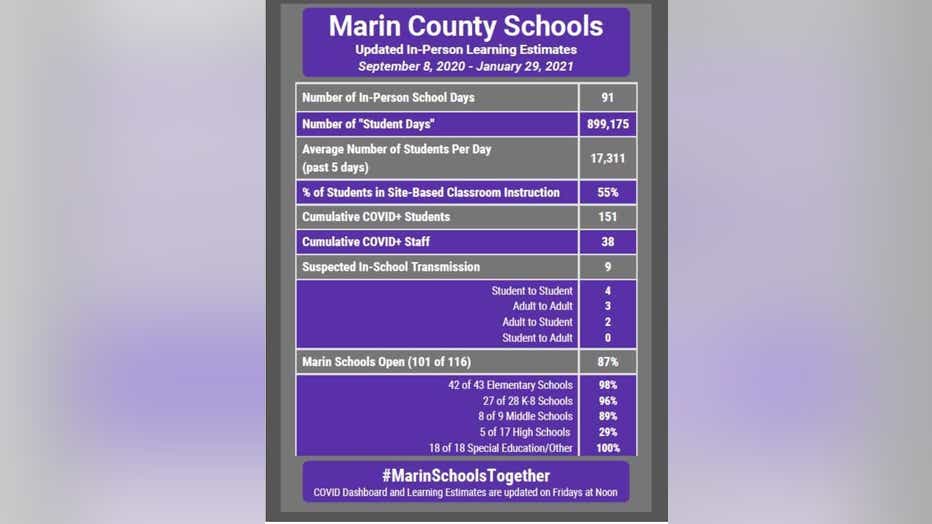 Schools with grades 7-12 that have already reopened are also allowed to continue providing in-person instruction under the state's reopening framework for schools.

However, schools with those higher grades that have not yet opened will have to wait for their county to leave the purple tier to do so, according to the California Department of Public Health.

Leaving the purple tier requires a county to record a rate of new cases per 100,000 residents below seven and a coronavirus test positivity rate below 8 percent.

Gov. Gavin Newsom has implored state legislators to approve $2 billion to support schools reopening amid the pandemic as the state works to vaccinate wider swaths of its population.

The fate of that funding package and the timeline for how soon teachers can receive vaccinations remain up in the air and could hamper the number of schools that reopen before spring.

Information on the state's plans for reopening schools can be found here.