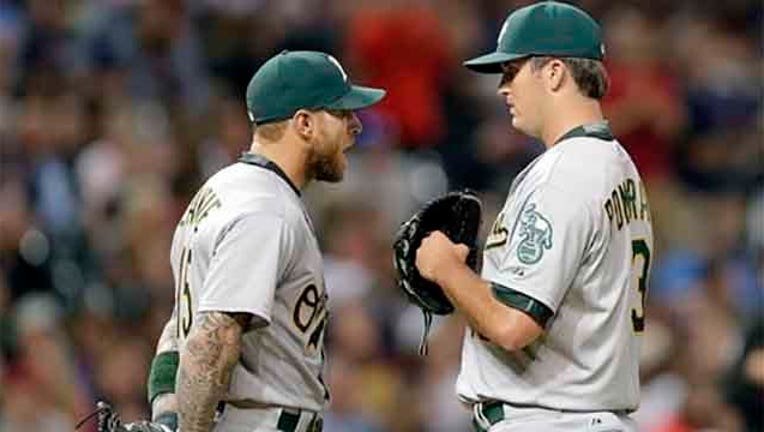 CLEVELAND (AP) — After losing the last two games to the Yankees in New York, Oakland struggled again in its weekend series opener in Cleveland.

The Athletics were able to get only five hits off Danny Salazar in a 5-1 loss to the Indians on Friday night. Oakland has dropped three straight and nine of its last 14.

"We're getting some well-pitched games against us," Oakland manager Bob Melvin said. "You go through periods where you swing really well and others where you're not swinging it as well."

Oakland is fourth in the American League in hitting with a .257 batting average, but the Athletics are batting .189 (25 for 132) through the first four games of its road trip.

The Athletics' only run came in the first after an error by second baseman Jason Kipnis. After Billy Burns led off with a single, Mark Canha reached on Kipnis' error on a fielder's choice. Canha was forced at second on Josh Reddick's grounder and Ben Zobrist walked to load the bases. Billy Butler then had a sacrifice fly.

Salazar (8-4) came within one out of his second career complete game.

"He was throwing well. My last at-bat in the eighth inning I think he threw me five different pitches for strikes," said catcher Josh Phegley. "It seemed like he had everything going."

Kendall Graveman (6-5) allowed four runs with six strikeouts and three walks in 6 2/3 innings for his first loss since June 13. Graveman's 19-inning scoreless streak ended on Yan Gomes' RBI double in the fourth that tied the score.

The Indians, who have won four straight, broke through in the sixth with four runs. Carlos Santana singled off Graveman to start the inning and took third on Giovanny Urshela's two-out single. Michael Bourn walked to load the bases.

Drew Pomeranz replaced Graveman but issued a five-pitch walk to Kipnis for the go-ahead run. Francisco Lindor walked on a full-count pitch, prompting a visit from pitching coach Curt Young. Michael Brantley lined the next pitch into center field for a 5-1 lead.

It was the first time in nine outings that Pomeranz has allowed a run. The left-hander has given up only three earned runs in 18 relief appearances since he was reinstated from the disabled list on June 3.

"That's our best lefty and the guy we've been using in our best situations," Melvin said. "With the workload of (Eric) O'Flaherty the past two nights that's the guy who we wanted."

Salazar, who struck out eight, retired the first two hitters in the ninth before Zobrist doubled and Butler was hit by an 0-2 pitch. Cody Allen came on and got Ike Davis on a foul out for his 19th save, and third in three nights.

Right-hander Jesse Hahn, scratched from Saturday's start, will likely be placed on the 15-day disabled list with a strained forearm. He flew back to Oakland on Thursday and had an MRI, which revealed the injury. Hahn is 6-6 with a 3.35 ERA in 16 starts.

Athletics: LHP Sean Doolittle (strained shoulder) played catch at 75 feet Thursday and had no issues. He's on the 15-day disabled list for the second time this season.

Indians: RHP Josh Tomlin, who had shoulder surgery in March, began a rehab assignment at Double-A Akron on Friday and pitched 2 2/3 scoreless innings.

Athletics: RHP Chris Bassitt will be called up from Triple-A Nashville to start Saturday. He's taking Hahn's spot in the rotation.

Indians: RHP Carlos Carrasco, who came within one out of a no-hitter in Tampa Bay on July 1, allowed four runs in the first inning and got the loss in his last start against Houston on Monday.