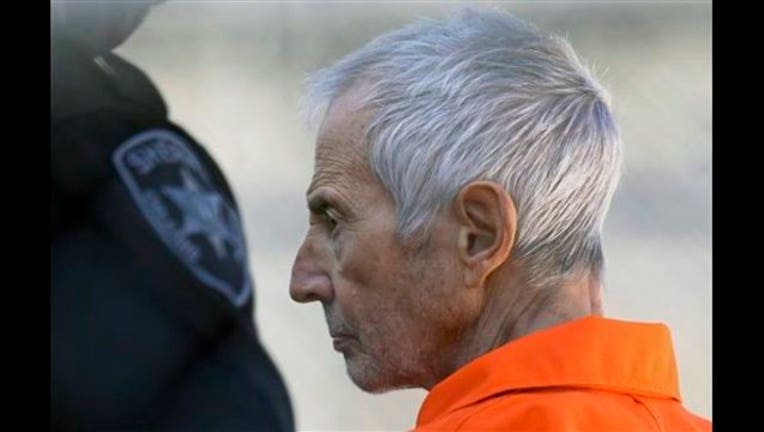 LOS ANGELES (AP) — The whispered words of Robert Durst recorded in an unguarded moment in a bathroom could come back to haunt him — or help him — as he faces a murder charge.

A possible move by prosecutors to introduce the incriminating material from a six-part documentary on his strange life and connection to three killings could backfire as interview footage did in the Michael Jackson molestation trial and the Robert Blake murder case.

In both cases, the defense was allowed under the "doctrine of completeness" to provide segments of interviews that presented their clients favorably without subjecting them to tough cross-examination.

In the Jackson case, the defense used unaired footage to counter damage done by "Living With Michael Jackson," a damning documentary in which Jackson held hands with his accuser and spoke of letting children into his bed.

"I'd slit my wrists before I'd hurt a child," Jackson said in one outtake shown by the defense, according to Mesereau, who won the performer's acquittal 10 years ago.

In the Durst case, prosecutors could seek to play portions from "The Jinx: The Life and Deaths of RobertDurst," that concluded with the eccentric millionaire off camera talking to himself in a bathroom with his wireless microphone still live.

"There it is. You're caught!" Durst whispered before the sound of water running can be heard. "What the hell did I do? Killed them all, of course."

Durst was arrested in New Orleans on Saturday, the day before the final episode aired.

He has been charged in Los Angeles with first-degree murder in the 2000 killing Susan Berman, the daughter a mobster and a close friend who acted as his spokeswoman after his wife disappeared in New York in 1982.

Durst, 71, who is estranged from a family that has a real estate empire worth an estimated $4 billion, has long denied killing Berman and Kathleen Durst, who was declared dead even though her body was never found. Investigators had reopened that case and planned to speak with Berman when she was shot once in the back of her head at her home near Beverly Hills.

After the killing, Durst disguised himself as a mute woman and moved into a cheap Galveston, Texas, boarding house where he killed an elderly neighbor in 2001. He claimed self-defense and was acquitted of murder but convicted of unlawfully disposing of the man's body, which was found chopped up and floating in Galveston Bay.

While legal experts said Durst's remarks off-camera and to filmmakers during the production will most likely be admissible, prosecutors will have to decide if they outweigh the possibility that the defense would play other portions of interviews showing him denying any killing.

"I would see this moment of unguarded truth as worth a lot of those denials," said George Fisher, a former prosecutor and professor at Stanford Law School. "The flat out meaning of the statement is very clear on its face."

In the case of Blake, prosecutors sought to introduce a portion of a jailhouse interview of the actor discussing his family with Barbara Walters because it contradicted other evidence. The defense then successfully pushed to bring in the rest of the interview.

"It did a great deal both to humanize him and so he wasn't just seen as a celebrity," said M. Gerald Schwartzbach, who won Blake's acquittal on a murder charge involving the killing of his wife. "There was an image projected that a lot of people had about Robert as a difficult person. In this video, he came across as a very sympathetic person."

Prosecutors are not commenting on the Berman case while Durst is still held in Louisiana, where he also faces firearms charges. A lawyer for Durst did not immediately return a call seeking comment.