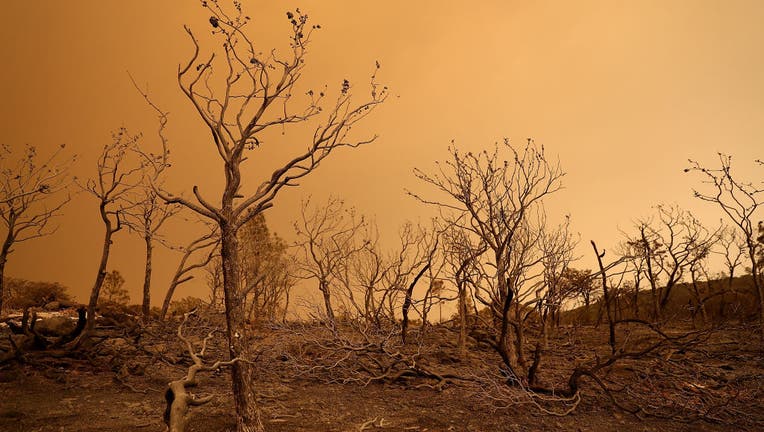 MENDOCINO NATIONAL FOREST, Calif. - The August Complex burning on the North Coast is now the largest wildfire in California history.

The lightning-caused complex started on Aug. 17 as 37 different fires and has since torched nearly half a million acres in the Mendocino National Forest. The U.S. Forest Service, which is handling the blaze, said it was 25% contained on Friday.

California’s previous largest fire, the Mendocino Complex, burned 459,000 acres just two years ago and reached into another part of the same forest as the August Complex.

As for the other top blazes in California: The SCU fires in Santa Clara and San Mateo counties are now No. 2, the LNU fires in the North Bay are now No. 3 and the North Complex is now at No. 4 in terms of acreage burned.

In all, wildfires have burned more than 3 million acres of land in the Golden State so far this year, and fire season, typically in October, hasn't even started yet.

“We are hitting the record books in ways that we never would have imagined, and definitely not records that we like breaking,” said Daniel Berlant, an assistant deputy director at Cal Fire.

Experts have blamed the worsening wildfire crisis on a number of factors, including climate change, which is parching the state’s forests, wooded hills and grasslands and priming them to burn more intensely. Most of the northern half of the state is in some level of drought after winter brought far below normal amounts of rain and snow. But California’s extensive history of extreme fire suppression in areas where wildfire has long been a natural part of the landscape as well as poor forest management are also causes, fire experts say.

The streak of disasters has left millions of Americans reeling. But it’s barely had an impact on the campaign for the White House, in part because of the vulnerabilities it highlights for President Donald Trump and his Democratic challenger, Joe Biden.

The president is already facing multiple challenges, including the pandemic, joblessness and social unrest, and can ill afford another one. When he talks about California, where fires have killed at least a dozen people and threatened thousands of homes, it’s mostly to blast the state’s Democratic leaders.

And for Biden, the spreading fires are a reminder to the party’s progressive base that he doesn’t embrace some of the most liberal elements of the Green New Deal, the grand plan for tackling climate change.

“The Biden campaign understands that a full embrace of an aggressive climate change agenda could create problems for them in Upper Midwest,” said Dan Schnur, who served as an adviser to former California Gov. Pete Wilson and Arizona Sen. John McCain. “Trump has shown no desire to talk about California beyond using it as a liberal punching bag to make his case to his conservative base.”

Still, climate activists say the moment underscores the need for Washington to support the Green New Deal, an ambitious — and likely costly — plan to wean the U.S. from fossil fuels and drastically cut greenhouse gas emissions.

“It’s no surprise that Trump isn’t talking about the fact that America is literally in flames on his watch — but why isn’t Biden?” said Rebecca Katz, a political strategist who has worked with Democratic congressional candidates supporting the measure. “For Democrats to not connect what’s happening on the West Coast to Trump’s failure on climate change is just political malpractice.”

The Biden campaign’s response to the fires is especially notable since his running mate, Sen. Kamala Harris, represents California in the Senate. She was campaigning in Miami on Thursday, but her spokesperson, Sabrina Singh, said Biden and Harris “have been closely monitoring the wildfires raging across the state and highlighting the urgent need to address the threat of climate change.”

“We have to get President Trump out of the White House and treat this crisis like the existential threat that it is,” he said.

While Biden hasn’t embraced the full Green New Deal, he has promised to make creating new green jobs and drastically reducing U.S. carbon emissions part of a larger recovery plan designed to revive the economy after the coronavirus abates. Biden’s top advisers note that many of his proposals will move the country toward the Green New Deal, but some activists worry it is not ambitious enough.

“I’m looking outside my window right now. Literally the world looks like it’s on fire. For young people across the board, but especially young Latinos, we also care very deeply about climate change, not just like immigration,” said Christian Arana, policy director for the California-based Latino Community Foundation. “This is a perfect moment to get on TikTok or do an interview with Teen Vogue or whoever to talk about these issues.”

Trump spoke with California Gov. Gavin Newsom on Thursday “to express his condolences for the loss of life and reiterate the administration’s full support to help those on the frontlines of the fires,” according to White House spokesman Judd Deere.

But the president has a history of criticizing California’s response to wildfires and threatening to withhold federal funding.

In 2019, months after the deadliest wildfire in California history tore through the town of Paradise in Northern California, Trump said the Federal Emergency Management Agency should stop giving the state money and blamed the fires on poor forest management. Fire scientists say climate change, not forest management, is a driving factor behind the state’s fires becoming worse and more deadly.

Still, Trump has always approved California’s request for major disaster declarations, as he did Aug. 22 as the state battled blazes across Northern California.

That approval came a day after he again blamed California for mismanagement and Newsom hit back in a video that aired during the Democratic National Convention in which he highlighted Trump’s threats.

Trump visited Iowa last month to meet with officials there about the derecho, and he surveyed damage on the Louisiana-Texas border following Hurricane Laura.

Trump visited California in November 2018 after Paradise was ravaged by the most deadly wildfire in state history. But he currently has no plans to visit areas on the West Coast impacted by the fires, according to a senior administration official who spoke on the condition of anonymity.

The official, who was not authorized to speak about the president’s travel plans, said it would be unwise for Trump to visit while the fires are still active as it would divert key first responder resources away from the firefight.