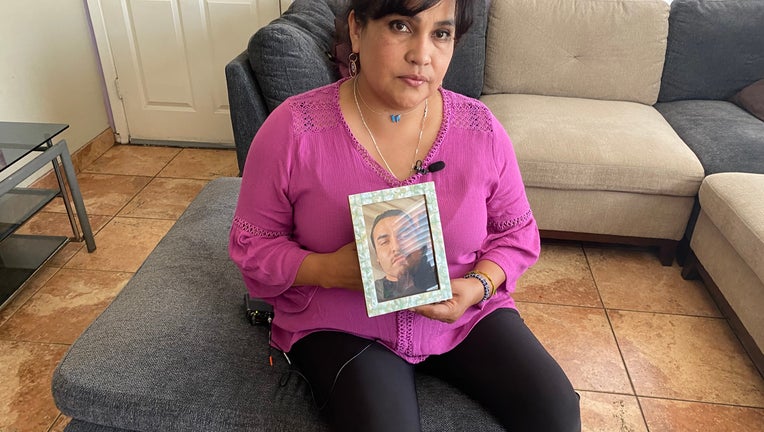 Edith Arenales of Oakland holds a picture of her son, Mario Gonzalez, who was killed by Alameda police on April 19, 2021. Photo: Lisa Fernandez

OAKLAND, Calif. - A 26-year-old man who died while being handcuffed by Alameda police eight months ago succumbed to "toxic effects of methamphetamine" with "physiologic stress of altercation and restraint" a contributing factor, the Alameda County Coroner's Office determined in an autopsy report released Friday.

"This is a clear-cut case of death at the hands of police officers, and we expect the district attorney will do a criminal investigation, and they should bring criminal charges against the officers," said Julia Sherwin, a civil attorney representing Gonzalez's 5-year-old son.

Sherwin said she believes Gonzalez died of asphyxiation and said the amount of methamphetamine in his system was low. She said she plans to file a federal civil lawsuit.

"It was the toxic level of drugs not the actions of the officers," Berry Wilkinson said in an interview. "There’s nothing in the report that any of the techniques used by the officers were unreasonable or excessive. They did a tremendous job under difficult circumstances."

The toxicology report by Ascertain Forensics was conducted a month after Gonzalez's death, and his autopsy was signed by Alameda County Chief Forensic Pathologist Vivian S. Snyder on Sept. 25, records show. It's unclear why it took until Friday to release the report, which was obtained through a public records request from the coroner's office.

Gonzalez's death came amid ongoing tensions between police and communities they're sworn to protect, following the police killing of George Floyd less than one year earlier. The Bay Area was facing its own reckoning with police accountability that only intensified after police released the body-worn camera footage of Gonzalez's desperate final moments.

The officers who restrained Gonzalez, James Fisher, Cameron Leahy, and Eric McKinley, remain on administrative leave while the investigation continues, city of Alameda spokeswoman Sarah Henry told KTVU. Parking enforcement officer Charlie Clemmens, who the city also determined was involved in the death, "is not being scheduled for work," Henry said.

In a statement Friday, Alameda Police Chief Nishant Joshi called the death a "tragedy" and said his office will complete a "thorough investigation."

"While we wait for the District Attorney’s office to make their decision and with the knowledge of the coroner’s report, the city will work diligently towards completing its ongoing independent investigation and take appropriate action," Joshi said in his statement.

He added that he's "committed to full transparency and accountability into the tragic death of Mr. Gonzalez, and as soon as more information is available, we will continue to share it. Again, my heart goes out to Mr. Gonzalez and his family."

In the department's first announcement about Gonzalez's death, police originally told the public that he had died of a "medical emergency" after a "scuffle" with police.

But body camera video released shortly afterward, it was clear that Gonzalez was unarmed. He declined to provide them ID, and in body cam footage, three officers were seen struggling to put Gonzalez into handcuffs and one of them had kneeled for at least two minutes on top of Gonzalez's back.

Gonzalez can be seen gasping for air and he was pronounced dead after he was taken to the hospital.

Several experts have said that officers have long been trained not to handcuff people facedown on the ground as it can lead to "restraint asphyxia."

In an earlier interview, Wilkinson said that physical struggle was because Gonzalez resisted the officers, who she said never intended for the struggle to progress the way it did.

"They never wanted to take him to the ground," Wilkinson said at the time. "It was the strength and intensity of Mr. Gonzalez's own momentum" that caused the group to fall.

She said that the officers noted he was highly intoxicated and stumbling around on a tree stump and thought he might harm himself.

Asked why the officers couldn't have called a family member to pick him up or let him sit on a bench to wait it out instead of restraining him, Wilkinson said those approaches would not have likely worked out because of his disorientation.

But family members and civil rights activists stressed that he was not suspected of a serious crime and said there was no need to arrest him.

"Police are not allowed to arrest people to keep from tripping," Sherwin said at the time. "They wanted to keep him from tripping, so they killed him instead? That's utterly ridiculous." 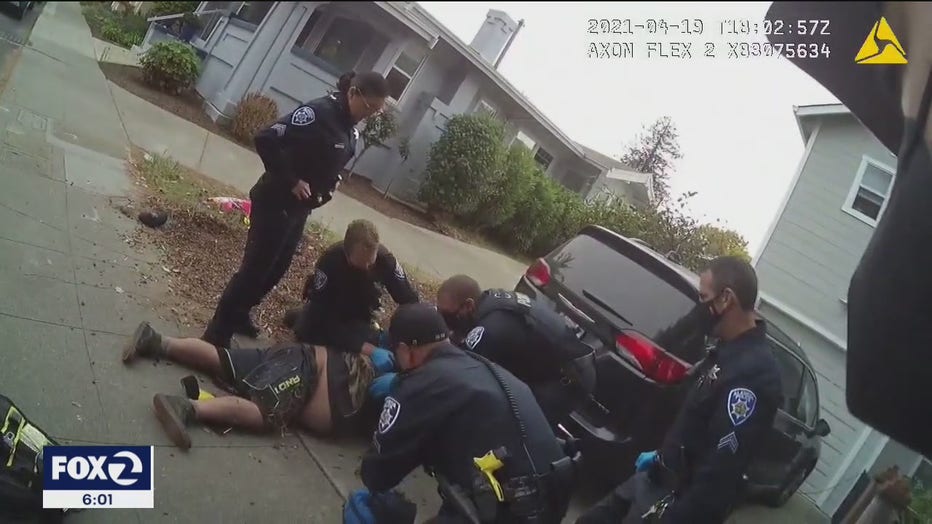 The city of Alameda has repeatedly delayed releasing records under a police transparency law citing the fact that the autopsy had not yet been complete. The last delay was on Tuesday. It is unclear if the city will lift the hold on the release of more information now that the autopsy has been released.

And while the city had vowed transparency in the months after Gonzalez died, the latest update this week stated: "withholding potentially responsive material at this time remains necessary to avoid substantially interfering with the multiple investigations into the incident. Accordingly, the department has again determined that the public interest in non-disclosure clearly outweighs the public interest in disclosure."

Gonzalez's life began to unravel during the pandemic.

After graduating from Coliseum College Preparatory in Oakland, Gonzalez had planned to go to Alameda College. But he delayed those dreams to help his mom with the bills and care for his younger brother who suffers from severe autism.

During last year's COVID shutdown, Gonzalez lost his job cooking in an Italian restaurant that went out of business during the shutdown. And like so many others, he hadn't been able to find work since then. He kept looking but never had any luck.

He got depressed. He began to eat more and gain weight. He was anxious and was prescribed medications to help. He worried if he or his mother died who would take care of his brother Efrain, 23, who suffers from severe autism and is nonverbal. He wanted to be able to provide for his 4-year-old son, Mario Jr., whom he shared parenting duties with his ex-girlfriend in Fremont.

And while none of his family members knows exactly what Gonzalez was doing in Alameda that day, they said he often traveled there for peace and quiet.